Deadlands DLC release: November 1st for PC, November 15th for Console.
The Gates of Oblivion story reaches its climatic finale in The Deadlands DLC for ESO. The way to Mehrunes Dagon’s realm has been opened and his legions of Daedra and cultists prepare to unleash a series of new and terrifying Daedric inventions on the lands of Tamriel. The call now sounds for heroes to thwart these schemes.

In addition to the burning and scoured fields of Mehrunes Dagon’s domain, The Deadlands DLC also invites you to visit Fargrave, a mysterious city shrouded in the corners of Oblivion. Here, “friendly” Daedra and mortals inhabit a metropolis unlike any other. But despite the tentative peace, tensions lurk beneath the city … tensions that Mehrunes Dagon is eager to exploit for his own gain.

The base game introduces some exciting new features including the new Armory system – which allows you to save out character builds – curated item set drops to help better ensure you get items that are not yet unlocked, new Mythic items, NVIDIA DLSS & DLAA Support, and more! Be sure to check out all the details below. There are also a number of changes affecting combat and itemization including some adjustments to proc sets and critical hit damage, plus allowing sets to now grant hybrid stats. For a full summary of the changes affecting combat, please see this forum post.

You can read more about all the new features in detail at the bottom of the page.

Zones within Deadlands: Deadlands added 162 furniture pieces to the game. Click here to view them!
ESO Armory System - Learn how to use the Ingame Build Saver for ESO

The ESO Armory System allows you to save your ESO build with one click. This new feature was intoduced with the Deadlands DLC U32 update.
Read more

Armor Sets in the Deadlands DLC

Your search query must be at least 4 characters long
Deadlands added 162 furniture pieces to the game. Click here to view them! 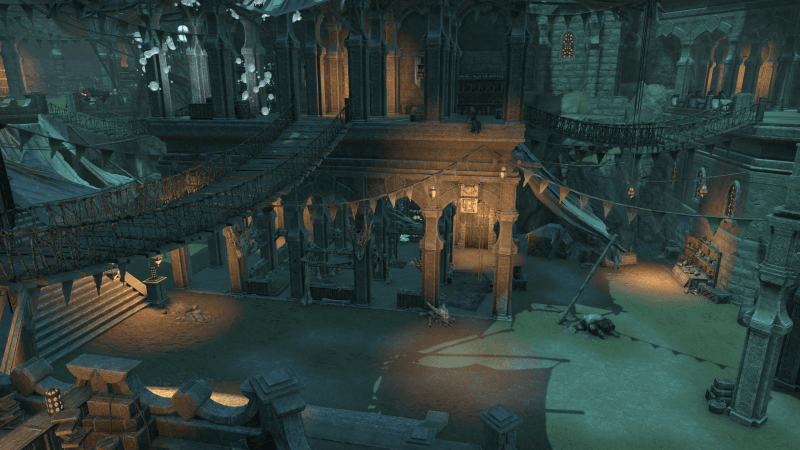 New Zone: The Deadlands in ESO

The Deadlands is suitable for characters of all levels. Begin your adventure by traveling to the city of Fargrave by using a Wayshrine to travel directly to the outskirts of Fargrave or accepting the quest “The Celestial Palanquin” from the Stories section in the Collections UI.
Find out how to enter the new Deadlands zone in ESO and take a first look at how Fargrave and the Deadlands look like!

With the Deadlands DLC, there will be a lot of new outfit styles available, as well as many other rewards which you can use for individualizing your character. The more quests and achievements you absolve, the more you can customize your character.

The Deadlands DLC in ESO also makes more titles available, which you can use on your character. In order to get these titles you have to complete the following achievements:

There will also be new motifs available which you can collect. You will also need specific style items if you want to craft items in this style.

A variety of new furnishings await in the Deadlands, including: 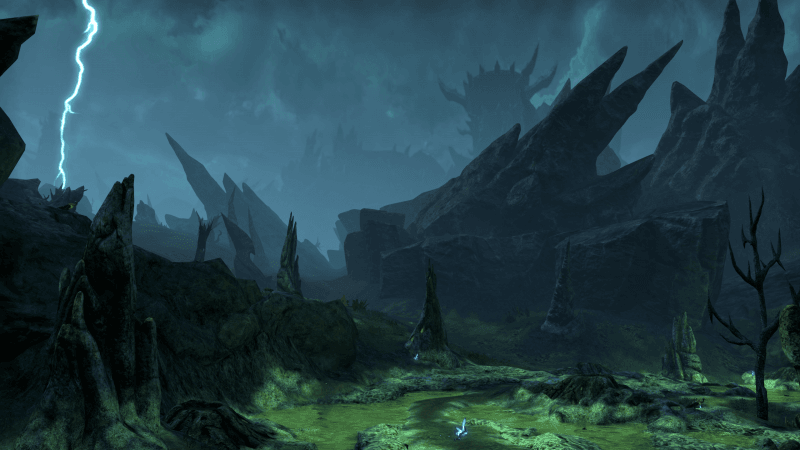 Introducing The Armory – a new system that helps relieve the friction between switching or experimenting with your character’s builds! The Armory allows you to save any of your custom character builds, remembering your gear, Attributes, Abilities, Champion Points, and even if you are a Werewolf or Vampire. You can then effortlessly load any of those saved builds in an instant.


The Armory Station furnishing is free to all players and is part of the ESO Armory System. To get started, simply obtain the free Armory Station from the Crown Store and place it in any of your homes. The Armory station allows you to save any of your custom character builds, remembering your gear, Attributes, Abilities, Champion Points, and even if you are a Werewolf or Vampire. You can then effortlessly load any of those saved builds in an instant, all at no cost.

You get two build save slots for free per character, if you need more you will have to purchase an Armory Slot in the Crown Store under Upgrades.

Armory Station
Ghrasharog, Armory Assistant is available for a separate purchase in the Crown Store to access all the functions of the ESO Armory System outside of your home. The Armory Assistant allows you to save any of your custom character builds, remembering your gear, Attributes, Abilities, Champion Points, and even if you are a Werewolf or Vampire. You can then effortlessly load any of those saved builds in an instant, all at no cost. 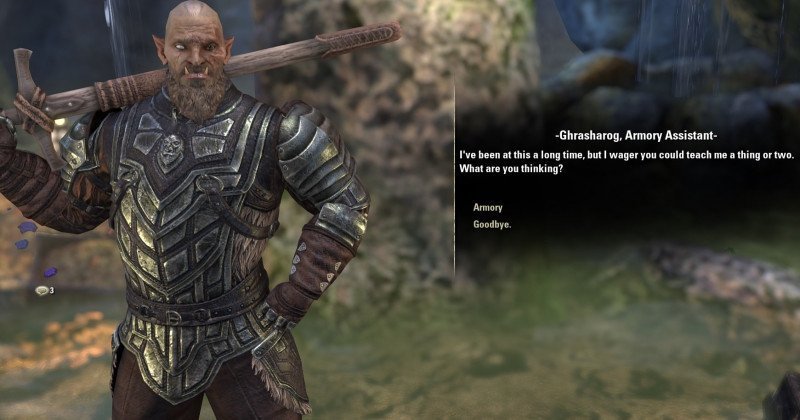 Bosses and reward chests from arenas and incursions will now preferentially drop set items that have not yet been unlocked in your Item Set Collections!

To compliment the new Curated Item Set Drops, we’ve added a Summary Page to the Item Set Collections UI. This is a high-level summary of your progress towards collecting every dropped set item in the game. Every major category has a progress bar to help guide you into finding the set items you are still missing.

Update 32 adds three new Mythic Items to obtain through the Antiquities system (note that the Greymoor Chapter is required in order to unearth Antiquities).

In Update 32, active Dark Anchors and Skyshards will now appear on your in-game map! 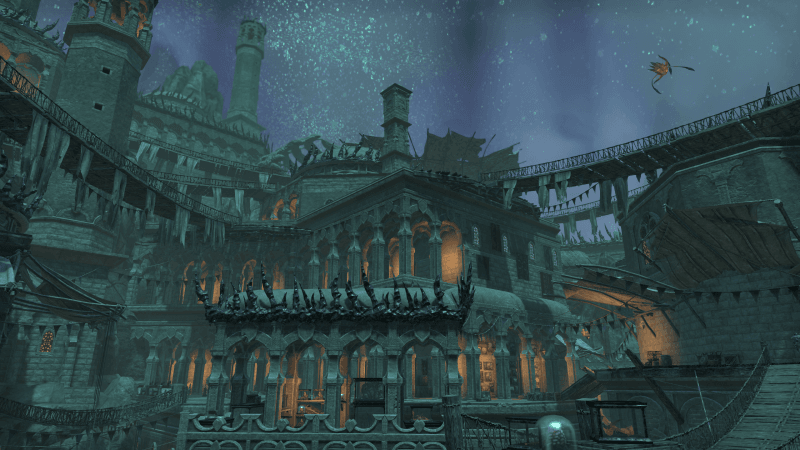 There are two new Crown Store homes available for testing with this update. Don't forget to take a look at our videos to get a tour of the houses!

We’ve added a new Combat Music dropdown in the Settings menu under Audio. You will now be able to decide if you want to hear all combat music, only boss combat music, or no combat music at all.

The Siegestomper emote is acquired by combining Arena Gladiator Proofs with an Arena Gladiator’s Revenge, available from War Researcher merchants in Cyrodiil. 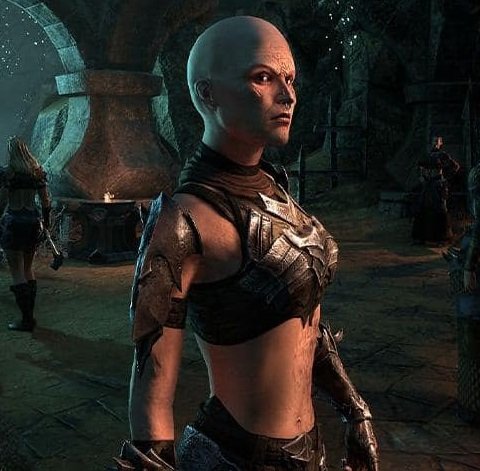 cited from the official site.

High Priest of the Order of the Waking Flame, Sister Celdina’s origins are as mysterious and sinister as the Dagonist leader herself. Learn more about one of Dagon’s most fervent mortal followers in this latest Meet the Character!

Governor Keshu,
I regret to inform you that, despite the Ivory Brigade’s best efforts, we have yet to locate the High Priest of this new Mehrunes Dagon cult, the Order of the Waking Flame. The few cultists we did question were new recruits with little knowledge of the actual workings of the organization. I heard rumors about individuals with ominous titles such as Devastator, Disastrix, or Doombringer, but received very few actual names to pursue. I did finally find one name that prompted further investigation: a woman named Sister Celdina.

As far as I can determine, Sister Celdina is not currently in Blackwood. Some other Dagonist is responsible for our current troubles. But she does seem to have authored various testimonies that many Waking Flame recruits have read, and some say that she oversees the training of select novices in a secret citadel “someplace far away.” Even more interesting, I found hints that this Sister Celdina was connected to the Longhouse Emperors’ court twenty to twenty-five years ago.
Since that’s a little before my time, I asked Councilor Lovidicus whether he recalled anyone by that name in Cyrodiil. His response:
“Sister Celdina? I recall the woman. She came to the White-Gold Tower sometime around 2E 556 or 557, during Emperor Moricar’s reign, and remained in Cyrodiil for about three or four years. She was a Breton priest, tall, with piercing dark eyes and a rather cold manner. I would describe her as strong and statuesque, with a presence and attitude that commanded one’s attention. I will never forget the rather uncanny way Celdina would stare at me until I felt almost compelled to look away.
“I never quite nailed down exactly what manner of priest she was or what her purpose was at court. In those days, Emperor Moricar maintained quite a collection of shadowy figures among his advisors—witchfolk from the Reach, mystics, charlatans, favor-seekers, influence-peddlers, and more. At times Sister Celdina seemed to be constantly at his side, but she rarely offered him any counsel in front of the rest of the court. At other times she disappeared for months to the gods only know where.
“At one point, I hired investigators to see what could be learned about Sister Celdina and how she might be advising Emperor Moricar. They discovered that she was raised in a priory near Stormhaven, taken in by priests of Magnus as a young orphan. Durcorach’s horde of Reachfolk pillaged the priory in 2E 541, and they carried her and others off into captivity. When she finally resurfaced, many months after the priory’s destruction, it was to renounce her vows and resign from her order. She sailed from Daggerfall to Leyawiin, and dropped out of sight around 2E 544. Where Celdina spent the next decade I could not say—she simply turned up one day at the White-Gold Tower and presented herself to Emperor Moricar, who rewarded her with a minor court appointment. Then a few years later, she departed the court just as suddenly as she had appeared. I never saw her again.
“Given what we now know about the Longhouse Emperors’ secret allegiances and the rise of the Waking Flame cult, I wouldn’t be surprised to learn that Sister Celdina served as a priest of Mehrunes Dagon in Moricar’s court. It wasn’t something that Moricar chose to advertise—that mistake, he left to his son Leovic. But I must say I never saw Sister Celdina wearing Magnus’s holy symbol, or heard her speak a prayer in his name.”
Beyond what Councilor Lovidicus recalls, that’s all I could uncover about Sister Celdina. I wish I had better news to report. Wherever this Sister Celdina is, she’s out of our reach for now. If she turns up in Leyawiin, we’ll make capturing her our top priority. But in the meantime, we still have a mysterious High Priest to deal with and Waking Flame sympathizers watching our every move.
Your faithful servant,
Captain Rian Liore
The Ivory Brigade of Leyawiin