How do proc sets scale in ESO?

Many players are confused at how proc sets actually scale in ESO. The game itself doesn't really tell you how certain values scale, you need to figure that out by yourself with testing, or reading the guide here. The game differentiates between three different values: damage, healing and tanking based proc sets. Please also keep in mind that the scaling of the proc sets is based on the old damage numbers pre update 30 (Blackwood). But basically proc set values increase with higher stats.

Below in the image you can see an example of a proc set that can critically strike. Stormfist hit the target dummy with a critical strike idicated by the exclamation mark behind the damage number, dealing massive damage. 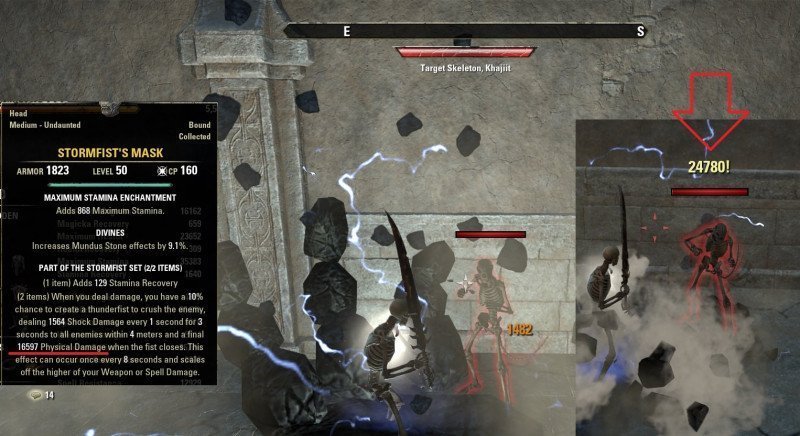 Burst damage proc sets have always been a pain in PvP in ESO. Players used to stack 3 different proc sets and let them go off all at the same time, that way the enemy won't have a chance to actually react to the insane damage if they all go off within a second.

To avoid this issue, the developers implemented a mechanic where item sets that deal a "burst" of damage in 4 seconds or less now have a 1 second window after proccing that prevent similar item sets from activating. That means if you are wearing 3 proc sets they won't go off at the same time, but every 1 second one of the proc sets will activate.

How do you determine the order of how it will activate the proc sets?

If wearing multiples of these sets at once, any action that would activate multiple sets will instead trigger the first set you equipped and suppress others for 1 second. After that second passes you will be able to attempt to trigger them again. Basically you have to equip the sets on your character in the order you want them to activate.

The sets affected by the proc order change are listed below:

Below you can find the developer comments regarding the proc sets rework in the Deadlands DLC (update 32).

"Now with the hard cap to Critical Damage and Healing, as well as a new rule set that aims to diminish stacked item set burst potential, we’re moving forward with re-enabling item sets to Critically Strike when applicable. We decided to only target sets that are made for builds that are already building higher than base Critical chance, and have made additional changes to ensure they don’t become outright better than flat stat sets. This should significantly help viability of these sets in PvE, while many of the other targeted adjustments made should keep them reigned in for PvP environments. We expect these values or rules may change over time and we will be keeping a close eye on it."

"In efforts to help reduce the viability of stacking multiple proc sets at once and triggering them at high moments of burst, we've adopted a new standard for sets that lack ingrained counter play. These sets will now always prevent other sets on the list from activating at a singular moment, reducing the ability to front load damage into things such as Heavy Attacks or Ultimates and instantly killing targets. This list can be expanded and adjusted upon in the future, and moving forward, item sets will be held under greater scrutiny in terms of ensuring there are either moments of opportunity to avoid or outright prevention in terms of stacking."
Now you know everything there is to know about how proc sets work in ESO. For further questions you can also join our community partner discord server.

Everything you need to know about Skyshards in The Elder Scrolls Online. Locations of the Skyshards are also included.
Read more

Complete list of all ESO Critical Damage buffs. Everything you need to know about Critical Damage in ESO. Crit Damage can be found in: sets, skills, champion points, passives and .....
Read more

Explanation on the benefits of sets in The Elder Scrolls Online. How do they make you more powerful? How can they help increase combat or farming efficiency?
Read more