On June 1st 2021, ESO got a new chapter called Blackwood. With this chapter, companions were introduced. These are NPCs that a player can call upon to guide them through the game, lend them a helping hand in killing enemies or be a companion on questing missions.
They come with a wide variety of possibilities, from having unique skills, their own questlines, to also having unique armor.
ESO Companion gear differs from player gear quite a lot, which is why this guide answers all the questions you might have about companion gear. 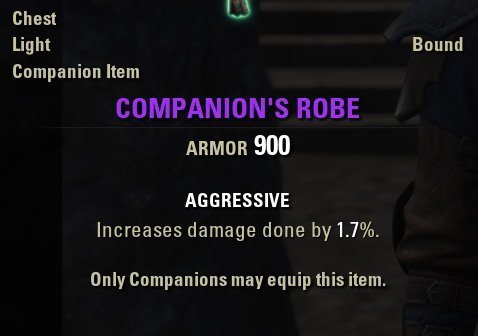 What's the ESO Companions Gear about?

ESO Companion equipment is distinct from player gear with no overlap between them. ESO Companion gear unlocks with a set of untraited white equipment based on their background. Since Blackwood came with two companions, Bastian and Mirri, they also got their unique gear. Bastian begins with wearing Medium Armor and a Destruction Staff, while Mirri starts off with Light Armor and a Bow.
Where ESO companion gear differs from player gear, is that it doesn’t include a level and it can’t be enchanted. It also doesn’t require repairs and does not include an inherent style appearance. Instead, it inherits its style of the companion it’s applied to.
All equipment can be traded for as long as it hasn’t been bound to their own companion, so that players can sell it through such means such as the guild stores.
Where to find Companion Gear in ESO?

White ESO companion gear can be purchased from Weaponsmiths, Woodworkers, Armorers, Leatherworkers, and Tailor merchants throughout the world, allowing the player to customize the companion role accordingly and to whatever they want.
Fine (green), superior (blue) and epic (purple) quality companion equipment with traits are obtained randomly from all kinds of monsters, such as Overland enemies, Worldbosses, World Events etc. Especially Mehrunes Dagon’s Deadlands (Oblivion Portals) seem to drop companion gear from the bosses.
The companion has to be active though in order for companion gear to drop. You can find more information on companion on the Companion Overview Page.

You can find everything here regarding the companion Mirri Elendis, that was added with Blackwood into ESO!
Read more