Double EXP: You can acquire a 100% EXP buff collectible by completing a simple quest called “Breda’s Bottomless Mead Mug“, you can obtain this quest from Breda at the event location. This EXP boost will stack with any other XP bonus. If you need help with optimizing grinding/ leveling please visit the ESO Grind Guide.

You can find the New Life Festival tent in Eastmarch, close to the Kynesgrove Wayshrine. There you can find Breda, who will give you the quests for the festival. You can also receive the New Life Festival quest from the in-game Crown Store and use it to find your way to Breda. There are 9 different quests and they can all be done every day of the event.

If you are having trouble traveling to Windhelm: 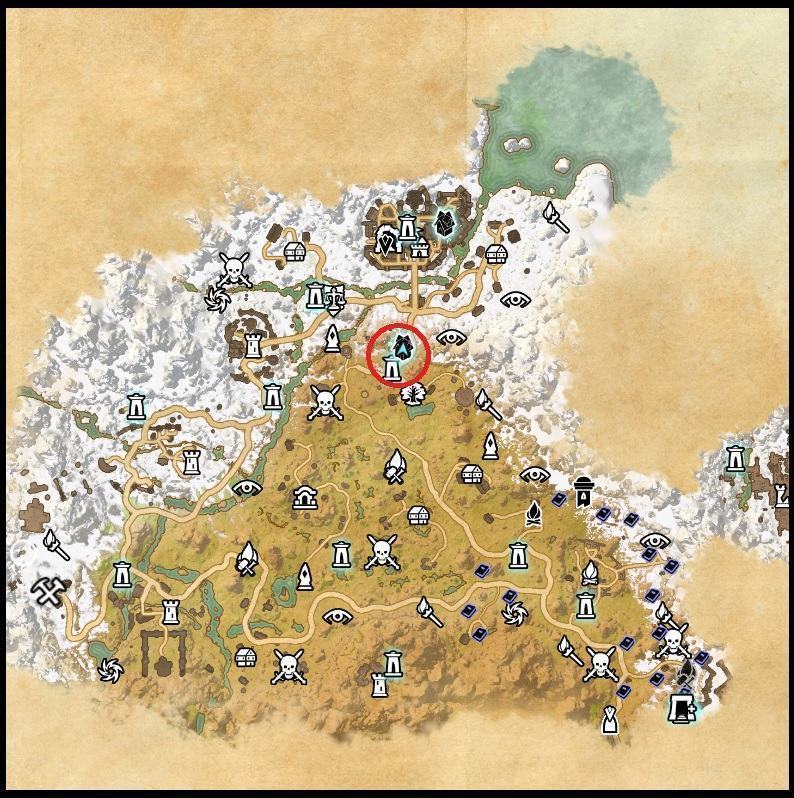 The Quests will send you all over Tamriel, there’s a quest for each playable race. For example, the Khajiit themed quest will send you to Reaper’s March. Finishing a quest will reward you with a “New Life Gift Box” which can contain provisioning recipes, pages of the Skinchanger Motif as well as rare hats, costumes (like the Nordic Bather’s Towel), mementos and Charity Writs.


Note: All these quests can be done on every character that you have.

Doing every quest at least once will reward you with the “New Life Cerulean” dye. There are several additional achievements, earning them all will net you the “New Life Magnanimous” title for your character. For that title, you will have to do several special achievements for each quest, learn the full Skinchanger Motif and all the New Life Provisioning recipes.

The Crystalfrost Skin can be obtained by completing the “Newly Charitable” Achievement. For that Achievement you will have to complete 12 New Life Charity Writs (any Charity Writ type works). Those are unique Crafting Writs, only obtainable during the New Life Festival. You will need to craft some basic furniture to complete the writs. 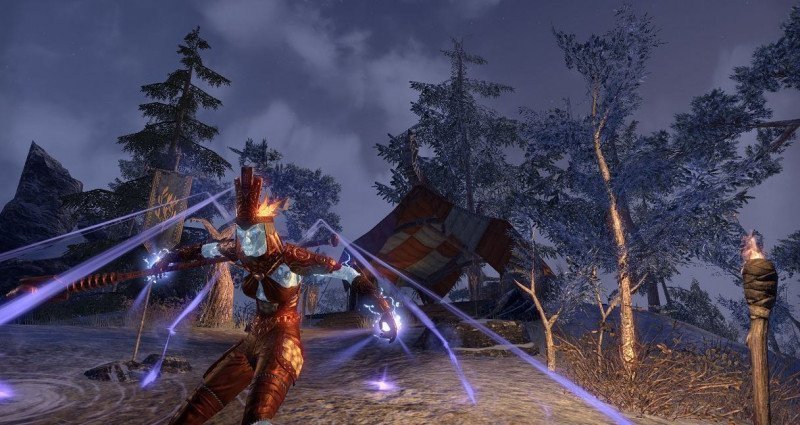 Rewards from the New Life Festival

A "New Life Gift Box" typically contains random items such as crafting materials, consumable mementos, and Wolfsbane Incense, the Skinchanger style item. However, they will also have a chance to contain rarer items, including:

Additionally, when you open a New Life Festival Gift Box, you can also receive one of these two different types of Charity Writs. 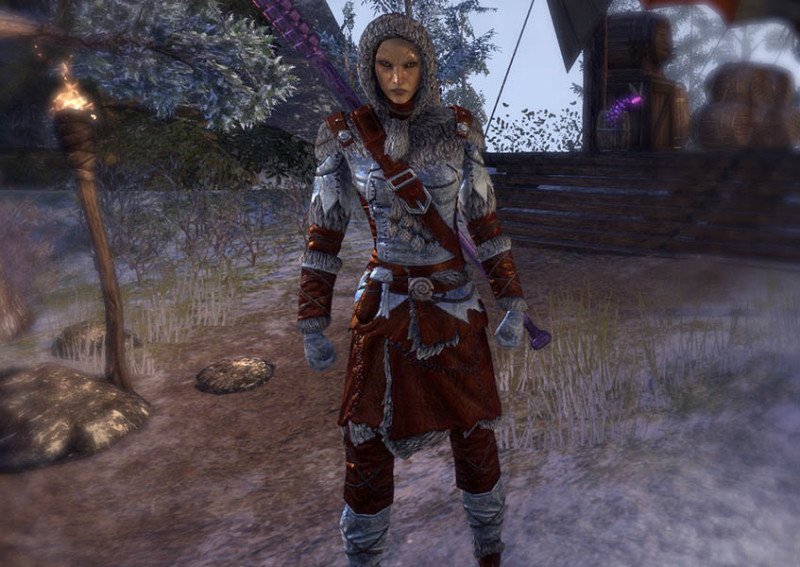 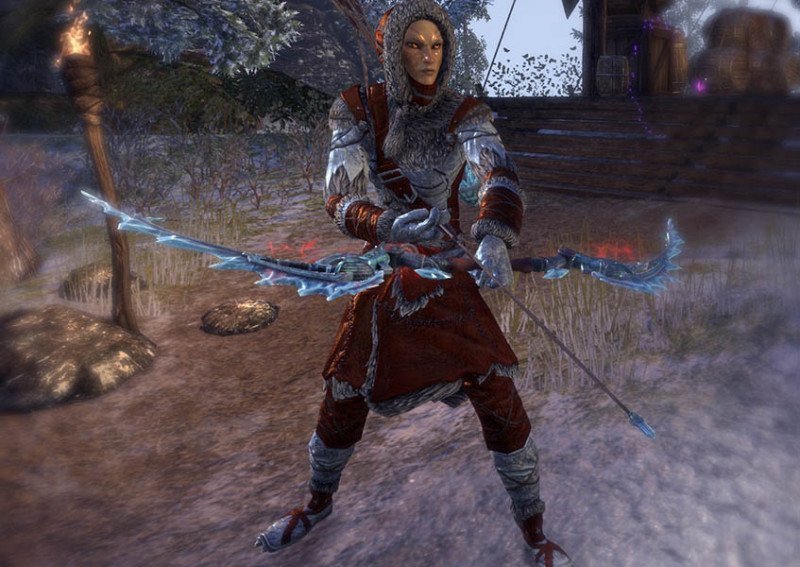 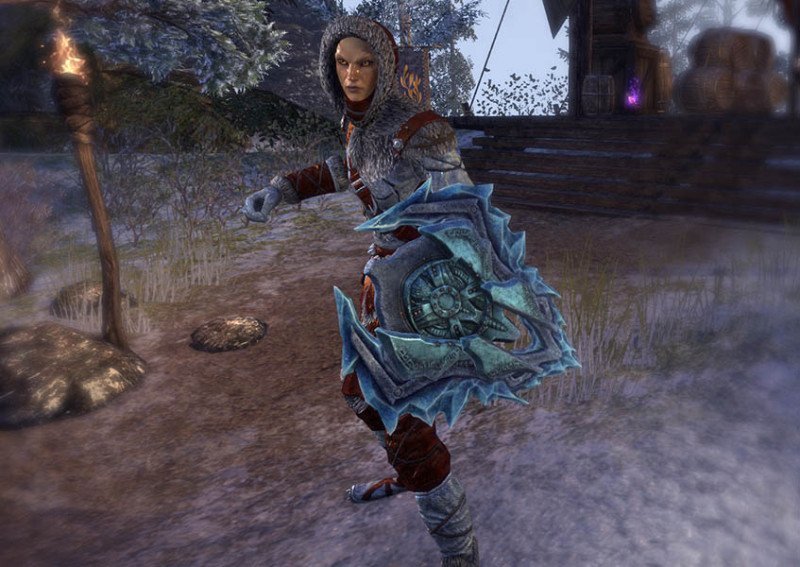 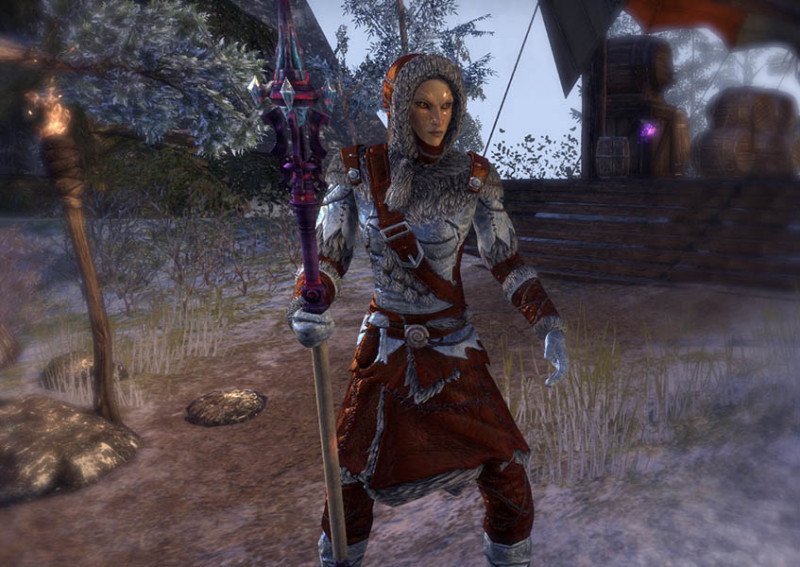 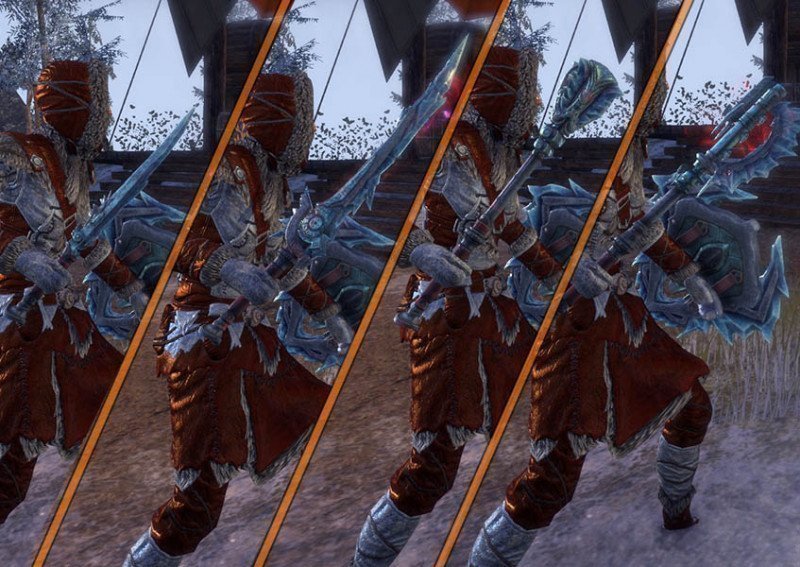 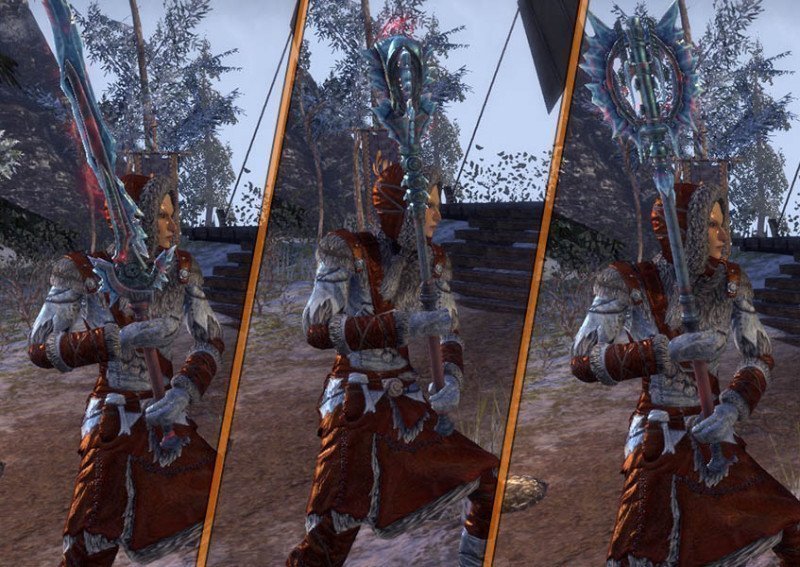 You can find the holiday achievement furnisher Heralda Garscroft in Grahtwood, Stormhaven, Deshaan and Vvardenfell. If you’re unsure whether you’ve completed the required achievements, check the achievements section of your journal for more information. The New Life Festival achievements can be found under "Holiday Events".
Furnishings:

The first time you complete a New Life Festival quest each day, you’ll receive three Event Tickets in addition to your Gift Box and other rewards. With Event Tickets, you can purchase the following goods from the Impresario:


This is also your first and final opportunity to collect all the fragments for the Doomchar Plateau house.

How Do I Obtain The New Life Festival Writs?

Every time you turn in a New Life Daily Quest by talking to Breda, you have a chance of getting one of the Writs as a reward. They are tradeable between players, so make sure to help your friends out if you have spare ones and they are still working on earning that skin, spread the Christmas and New Life spirit!

How To Craft Furnishings & How To Get The Blueprints?

The writs will ask you to craft very basic, cheap furnishings. The blueprints, patterns and schematics for those furnishings can be bought for small amounts of gold from Crafting NPCs. 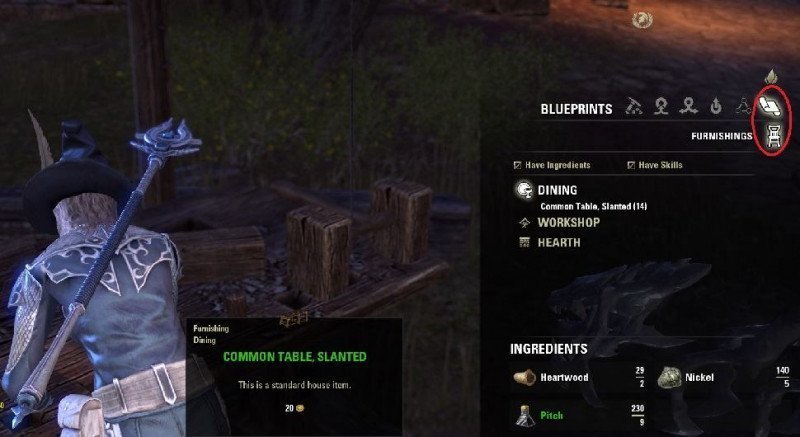 The NPCs you are looking for are Carpenters, Blacksmiths and Clothiers. They will offer the following blueprints, patterns and diagrams, buy them according to what the writ asks you to craft: 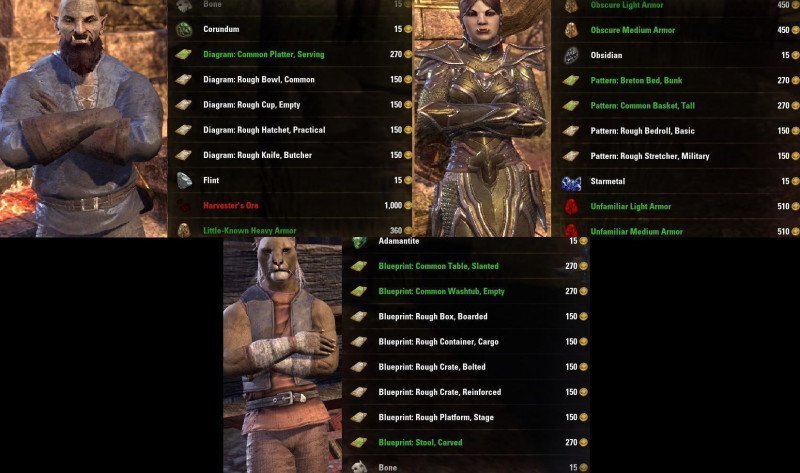 Note that some of these furnishings can only be crafted if you have a certain level of the respective crafting skill line and have put skill points in the required passive. The maximum requirements are:

As you can see, these requirements are pretty easy to reach. To craft a furnishing, access the crafting station and click on the tab to the far right. If you need help to understand the crafting system, check out the crafting guides.
You can find NPCs who sell those blueprints, patterns and diagrams in the crafting areas of most cities, here’s a map of Rawl’Kha as an example of where to find those traders. 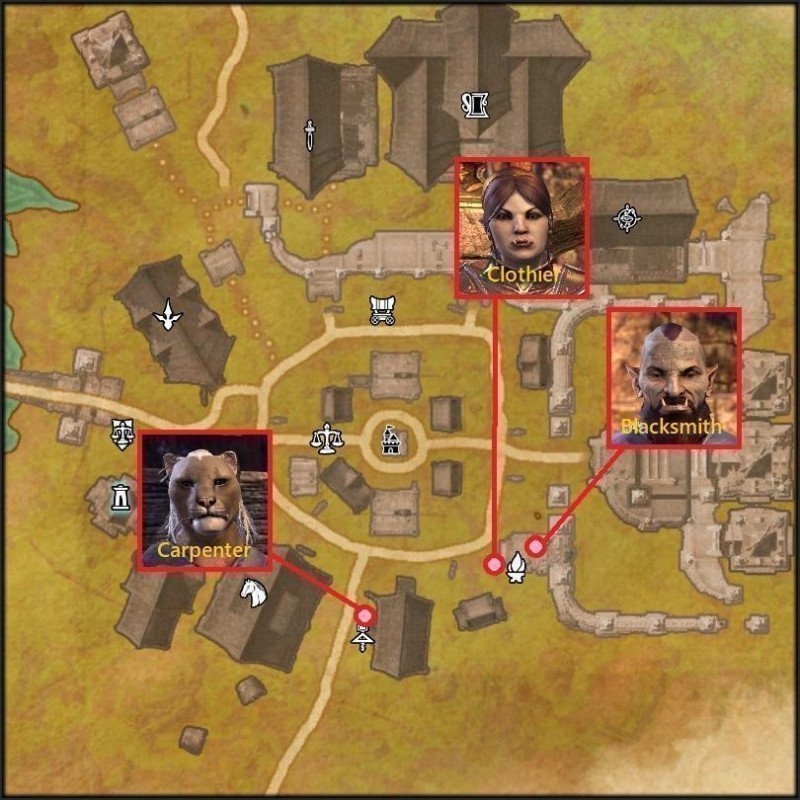 There is a wide variety of Crown Store items available during the New Life Festival.

You can now also acquire the Enchanted Snow Globe Home, too. The entrance to this home can be found within the New Life Festival Tent next to Breda on the table. 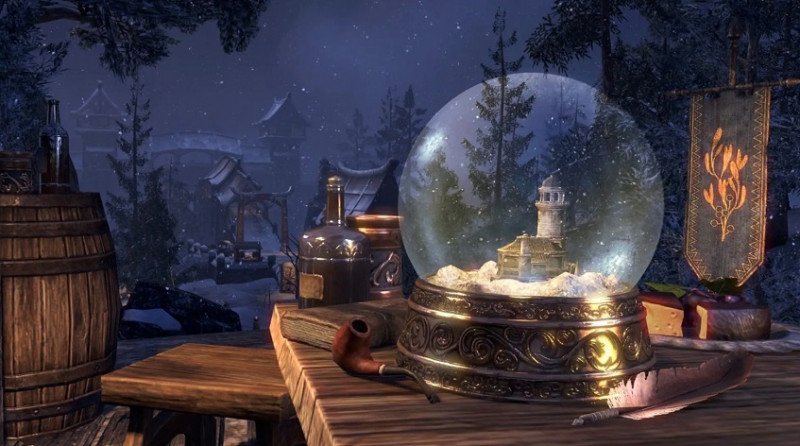 The Skinchanger Motif is obtainable through the New Life Festival Gift Boxes. 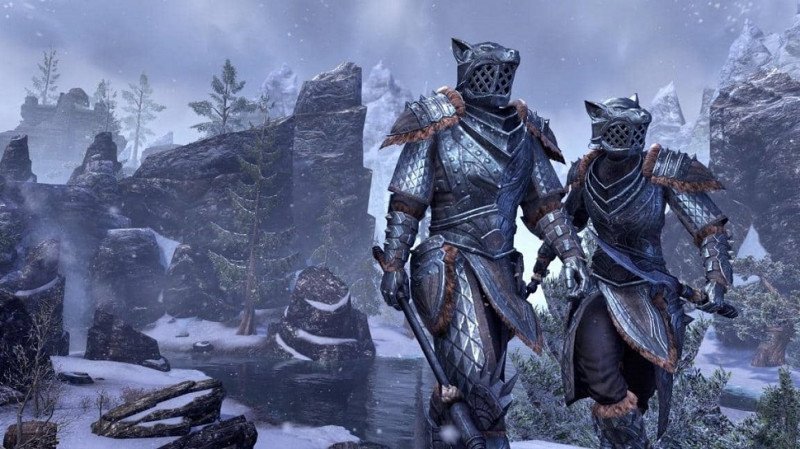 The Stalhrim Armor Pack for the Stalhrim Outfit will be available in the Crown Store on all platforms during the New Life Festival. 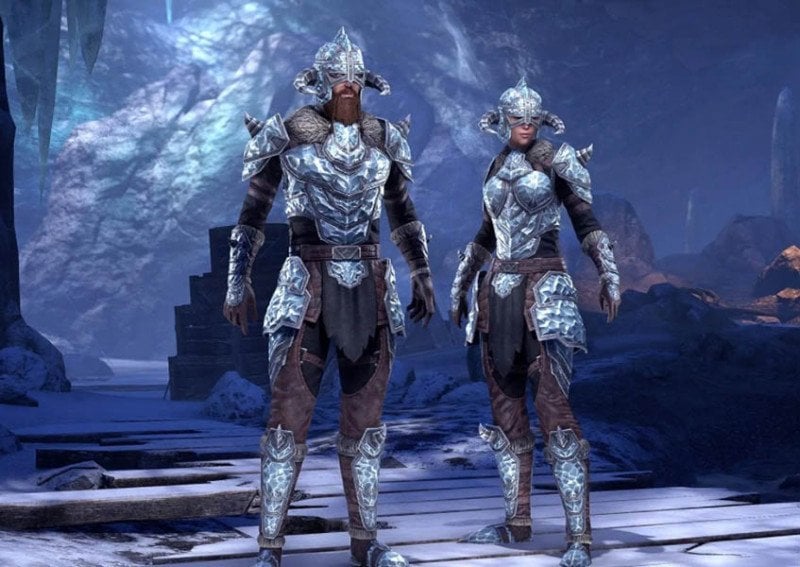 How do I get to the New Life Festival in ESO?

To take part in this cross-cultural celebration, pick up the New Life Festival quest from the in-game Crown Store and use it to locate the New Life Herald Breda, found south of the city of Windhelm, in the Eastmarch zone. You can teleport directly to the New Life festival tent via the portal found at Impresario locations.

How do you get the New Life Festival skin?

You can get the starter quest from the Crown Store or teleport to the Eastmarch zone to the event location. The New Life Festival tent is south of the city of Windhelm and next to the Kynesgrove Wayshrine.

How many quests are in the New Life Festival?

What time does the New Life Festival start?

How do I get the Crystalfrost skin in ESO?

How do you get tickets for the New Life Festival?

Players can receive three Event Tickets each day by completing one New Life Festival daily quest. A maximum of 57 tickets can be earned by the end of the event.

What is the New Life Festival?

Where is Breda in ESO?

Breda is a Nord New Life Herald residing in a tent south of Windhelm during the New Life Festival Event. She is the primary source of information about the festival.

How do I get the Snowball Buddy pet in ESO?

You can find the Snowball Buddy pet in ESO in the New Life reward boxes which you receive for handing in the quests during the New Life Festival Event.

How do I get the Powderwhite Coney pet in ESO?

You can find the Powderwhite Coney pet in ESO in the New Life reward boxes which you receive for handing in the quests.