Welcome to the Trait Research Guide for The Elder Scrolls Online. This guide will showcase how trait research works and how you can optimize your research to finish as fast as possible. However, it will take a while to get all traits researched no matter what you do, because there are plenty of traits and plenty of different items that you will have to research!

Learning traits will also enable you to use crafted eso sets. All crafted sets require you to have a certain amount of traits researched before you can craft the sets. You can learn more about crafted sets in the ESO crafted sets category. 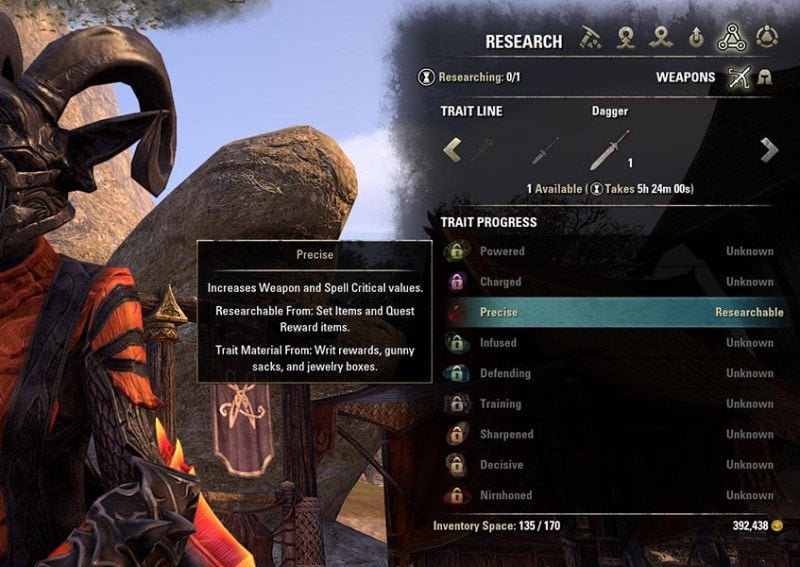 Why do I need Trait Research?


Trait research is necessary for you to alter or create gear items. All gear pieces have traits, armor, weapons and jewelry. For you to create a craftable set you are required to know X amount of traits. For example the Hunding's Rage set requires you to have 6 traits researched before you can even attempt to craft the set. To pick the trait of your choice when you craft a set you also need to have that trait already researched.

That leaves us with 3 major use cases:


Any long time player can tell you that trait research is an ongoing project in The Elder Scrolls Online. The first few traits can be researched in no time, the more traits you have already researched, the longer it will take to research the next trait, it gets exponentially longer as you can see in the table below.


Ways to reduce the amount of time it takes to research a trait:

How Many Traits Exist?

There are 3 different types of traits in The Elder Scrolls Online. One for armor, one for weapons and one for jewelry. Each of them has 9 different traits that need to be researched on each piece!


Now lets take a look at how many item pieces that you will have to research.

That means you will have to research 9 traits on each piece. Jewelry Crafting only allows for one trait research at a time, you can get a 25% research time reduction when you have the passive Lapidary Research.

Weapons
Heavy Armor
That means within Blacksmithing Crafting you will have to research 9 traits on each of the pieces, 14 x 9 = 126. The passive Metallurgy allows you to research 3 traits at the same time in addition of reducing the trait research time by 25%.

Light Armor
Medium Armor
That means within Clothing Crafting you will have to research 9 traits on each of the pieces, 14 x 9 = 126. The passive Stitching allows you to research 3 traits at the same time in addition of reducing the trait research time by 25%.

Weapons
Armor
That means within Woodworking Crafting you will have to research 9 traits on each of the pieces, 5x 9 = 45. The passive Carpentry allows you to research 3 traits at the same time in addition of reducing the trait research time by 25%.

The quality of an item improves the trait and makes it stronger; a common quality item will have a less powerful trait bonus than for example a Legendary upgrade.

Unlike armor, weapons can hold two slots or be wielded twice, so these stats are for one weapon. For two weapons the bonuses count double, unless otherwise indicated.
1 Handed: Stats shown in the Weapons table
2 Handed: 2x Stats

As you might have already seen, we have two more traits which you can find on all items. These traits offer no combat bonuses, and are not meant to be worn or wielded. You can’t research or craft them either.


There is a total of 27 different traits (Armor, Weapon, Jewelry) that have to be researched on each individual piece in The Elder Scrolls Online. Researching all traits is not an easy task, it will take a long time, especially since you will probably forget about it a few times, therefore planning is key!