Cyrodiil, the heart of Tamriel in ESO

At the center of Tamriel is Cyrodiil with its giant size. It is currently the biggest province in The Elder Scrolls Online. 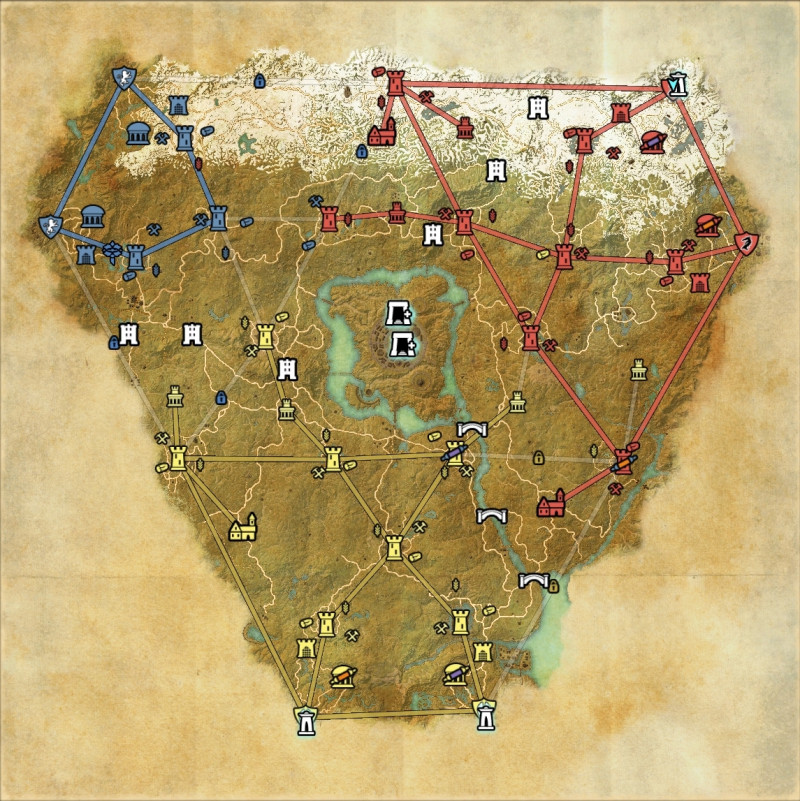 The Aldmeri Dominion, the Ebonheart Pact and the Daggerfall Covenant fight for control over it, as well as the Imperial City (a separate PvP area), in order to crown their own Emperor.

It is an open PvP area, which means that upon entering and leaving your first stronghold, you are no longer safe from being killed by a member of the other faction.
Fighting in Cyrodiil means capturing and defending keeps, strategical capturing of resources, claiming Elder Scrolls for your alliance and taking towns. A lot of quests are available too, as well as overland content for which you can gain specific benefits.
Upon character creation you have to choose your faction, which is usually determined by your race. Unless you have the Any Race, Any Alliance upgrade, which you can purchase with the Adventurer Pack bundle in the Crown Store for 1900 Crowns. Additionally, there is also the Imperial race available on top of the other 9 races with the Digital Imperial Edition Upgrade for 2100 Crowns, granting you access to play as Imperial that can be played in any alliance.
PC/Mac/Stadia: These Crown Store bought upgrades count per server, not per account, so when you buy it on the NA server it does not automatically apply to the EU server.

The Beginning of PVP in ESO

Upon reaching level 10 you will receive a message in the mail inviting you to Cyrodiil. With this Cyrodiil Beginner Guide we will try to help you understand all the basics that aren't covered in the tutorial.

Any benefits you receive from your faction will not be awarded to you if this isn’t your home campaign.
Upon entering you can approach an NPC which will give you the quest Welcome to Cyrodiil which will give you the option of either doing the tutorial on Siege weapons, or skipping it.
I advise you to do the tutorial, especially if it is your first time!
You will not be able to change your home campaign for 12 hours. You will only be able to enter it on characters of the same faction.
First selection is free, though future changes will cost 100,000 Alliance Points.
Your alliance gains Campaign Points based on the amount of Keeps, Outposts, Resources and Elder scrolls it possesses when the campaign is scored. If one alliance outpaces the others by a large margin, the lower-scoring alliance will receive scoring bonuses against the lead alliance. As a guest you will not be able to gain Campaign Points.
When your campaign ends, you are rewarded based on the number of Alliance Points you earned in your Home Campaign. 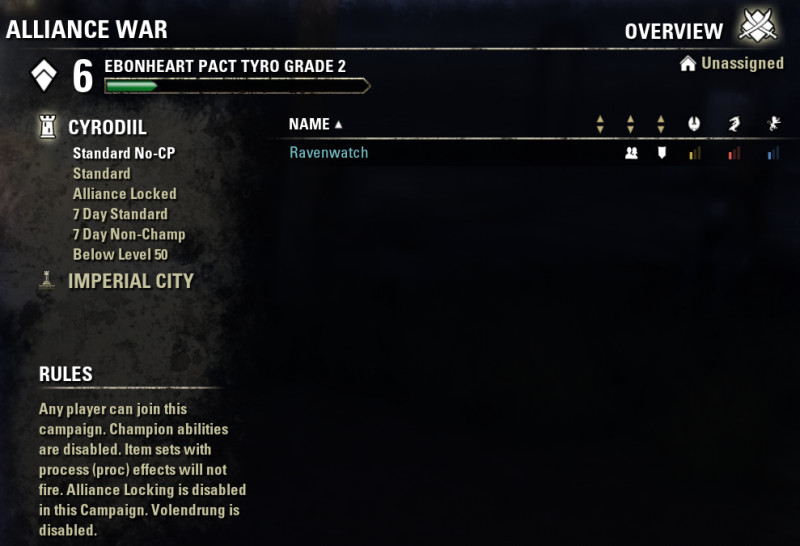 The first reward you will get is Alliance Points (AP). For partaking in PvP combat or by completing the repeatable quests in Cyrodiil you will receive these. Alliance Points serve different purposes. They are equal to EXP, but are also a currency. Whereas you can buy the basic equipment with in-game gold, you can buy these also with AP, as well as more advanced weapons, gear, motifs and a lot more.
AP are awarded as a separate currency to your character, but can also be stored in the bank and withdrawn on other characters. These do not count as new AP though on another character, so that you can’t level up with them on a different character.

You can also receive an Arena Gladiator's Proof from Conquest Missions. Along with the Arena Gladiator items that can be purchased from War Researchers, you can create various Arena Gladiator Runeboxes. These can hold an Emote, a Helm, a Costume, a Pet or various other rewards. You can only earn one Arena Gladiator's Proof per 20 hours per account.
At the end of a campaign you can receive a reward depending on the AP you have earned. You must be under the top 10% players of Cyrodiil to receive a reward up to 19500 gold and 5 Epic items in the 30 Day campaign. Additionally, you will receive a Transmutation Geode that you can shatter into 50 Transmutation Crystals for reaching the minimum of Tier 1 in the 30 Day campaign. You need to reach a minimum of 25,000 AP in order to receive this reward.l

Emperor is not a rank per se, but one of the main incentives in Cyrodiil. After all, all alliances strive after crowning the Emperor and fight for the Ruby Throne of Tamriel.
A lot of time is required in order to gather the most AP in your campaign, as that is a prerequisite to be crowned Emperor. Additionally, your alliance has to control all six keeps around the Imperial City.
Upon coronation you will receive you own skill line, title and costume, all of which you will keep even when you lose your status. Your faction will receive special bonuses as well for the time they have an Emperor.

Transitus Shrines allow you to fast travel in Cyrodiil. The keep or outpost you want to fast travel to needs to have an unbroken line in order for you to fast travel to it. Taking all resources break these links and are a good way to cut off reinforcements.
The map displays the major objectives in Cyrodiil such as keeps, towns and outposts, Transitus links between objectives, and any locales you discover.
You can move your cursor over a keep or resource to display detailed information. Any keep or resource under attack will be outlined with a starburst.
You cannot recall to a Wayshrine outside of Cyrodiil unless you teleport directly from the Wayshrine of the home gate of your faction.

With a total of three major Bridges in the southeast part of the map and six Milegates, their possible destruction was introduced with the Murkmire Update in October 2018. If they are destroyed there is no direct way connecting the other side, aside from either trails leading around it, or caves.

Siege equipment are items used to cause damage to either enemies or objectives, such as walls or doors. You can purchase rams, oil, trebuchets, catapults and ballistae at a Siege Merchant. You can usually find them in every keep, at every resource or at every outpost that your faction calls their own.
Since you can’t deal normal damage to keep walls you will have to use any of the Siege weapons in order to take it, or defend your outpost from getting taken by pouring oil on the attackers.
Items such as Repair Kits count as support and give AP as well when you repair walls, siege weapons or doors.
Forward Camps don’t grant AP when placed, but provide a means to resurrect at when you are out in enemy territory and don’t have any place nearby to respawn at.

Keeps are what most would consider the main objective in Cyrodiil, as that is what is needed to crown someone Emperor.

They have an outer wall and an inner fort which an enemy needs to breach in order to capture the keep. If it is under attack you cannot teleport from or to it, as well as if all resources are taken.
Inside the keeps are two Flags that need to be taken. You do that by standing on them and waiting for the flag to change color (indicated on your screen). As soon as the keep is successfully yours, you will receive AP for taking it.

Resources support a keep by making it available for your faction to teleport to and strengthens its defenses. The Farm provides the keep NPC guards with more health. The Lumber Mill strengthens the doors of a keep and the Mine strengthens the defense of the walls of a keep.
As mentioned before, if all of these are taken by the enemy, the Transitus Transportation will be broken and players will no longer be able to teleport from and to a keep.

Every faction has two Elder Scrolls by default. These are powerful items that grant either offensive or defensive buffs, plus a bonus to the hourly gained points by the alliance. You can pick it up and carry it around, but you can’t use a mount. Your location will be visible on the map by everyone due to the scroll symbol and certain abilities are unavailable.

The goal is to either bring the scrolls (back) into your territory, or defend yours, so that your faction can reap the benefits.

With Update 22, or the release of Elsweyr,Artifact Weapons were introduced into Cyrodiil.

These are powerful weapons that the Mad God Sheogorath brought into the warzone to cause chaos.

It is a mobile weapon and can spawn everywhere on the map. Upon picking it up your base attributes are normalized and you get access to new, incredibly powerful abilities. In order to keep the weapon, you have to gain alliance points by killing other players. If the AP meter drops to zero you will drop dead immediately and the weapon will be obtainable by someone else, if it was dropped in the first 30 minutes of its initial pickup.

In Cyrodiil we basically have three different kind of quest types.
The three different kinds are one-time quests which are generally PvE oriented, repeatable PvE and repeatable PvP quests.The Alliance quests are what you generally expect of Cyrodiil with its repeatable PvP quests to either defend objectives, attack them, scout out places or kill enemy players. They offer the largest amount of quests in Cyrodiil.In order to do the Fighters Guild quests, you need to invest a skill point into Bounty Hunter. This will make PvE oriented quests available, such as killing a specific kind of NPCs.

Settlement quests are comprised of the five settlements in Cyrodiil, namely Bruma, Cheydinhal, Chorrol, Cropsford, Vlastarus and the Weynon Priory. They are PvE oriented and repeatable.

Wilderness quests are easy, non-repeatable PvE quests that can be found throughout Cyrodiil.

With 18 delves and 9 accessible dolmens, Cyrodiil does not only variety in your gameplay, but also rewards you for completing either.

If you kill a delve boss you will receive a 20% bonus increase to the AP you earn for an hour. There is even an achievement connected to it.

If you destroy a dolmen you have the rare chance of getting a very powerful siege weapon. 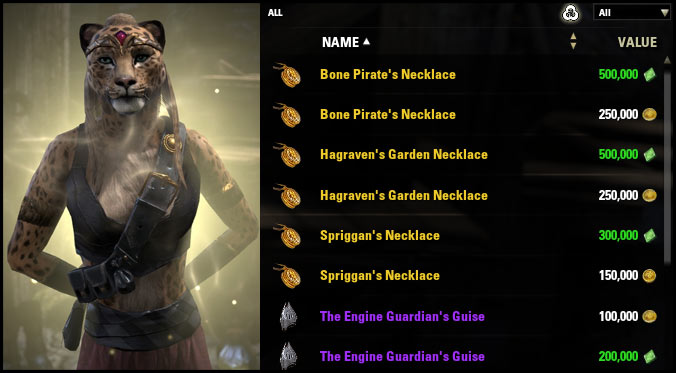 On the weekends, a special vendor appears in the base camps of each faction in Cyrodiil, called the Golden Vendor.

Mundus Stones and Skyshards are spread throughout Cyrodiil as well. You can find all but The Lord Mundus Stones in Cyrodiil, which makes it 12 in total, and about 46 Skyshards. 15 per territory and 1 additional one with an extra achievement. Collecting all of these will give you a total of 50 achievement points and 15 skill points.
You will also find Ayleid Wells in Cyrodiil which grant you the Minor Toughness buff for 10 minutes.

Achievements related to this guide

The Impresario Guide for ESO

Welcome to the Impresario Guide for ESO! Here you can find all the information you need to know in order to get all the achievements, event items and special rewards you can get from the Impresario during events in ESO!
Read more

How to get the Deconstruct Assistant in ESO

How to get a Transmute Station Guide ESO