In the Gates of Oblivion adventure, the player can explore a new storyline told throughout all of ESO’s 2021 content releases. In this year-long saga, the player will unravel the ambitions and schemes of the Daedric Prince Mehrunes Dagon 800 years before the events of TES IV: Oblivion.
Oblivion Portals are a new type of World Event introduced with ESO’s newest chapter “Blackwood”. World Events are big events that usually require a group of people to organize and get together, in order to kill enemies and destroy objectives.
Technically, they are Public Dungeons, so that everyone can enter and the difficulty isn’t too high. This way the player can go through a portal and be in a different place and return to where they entered the realm. 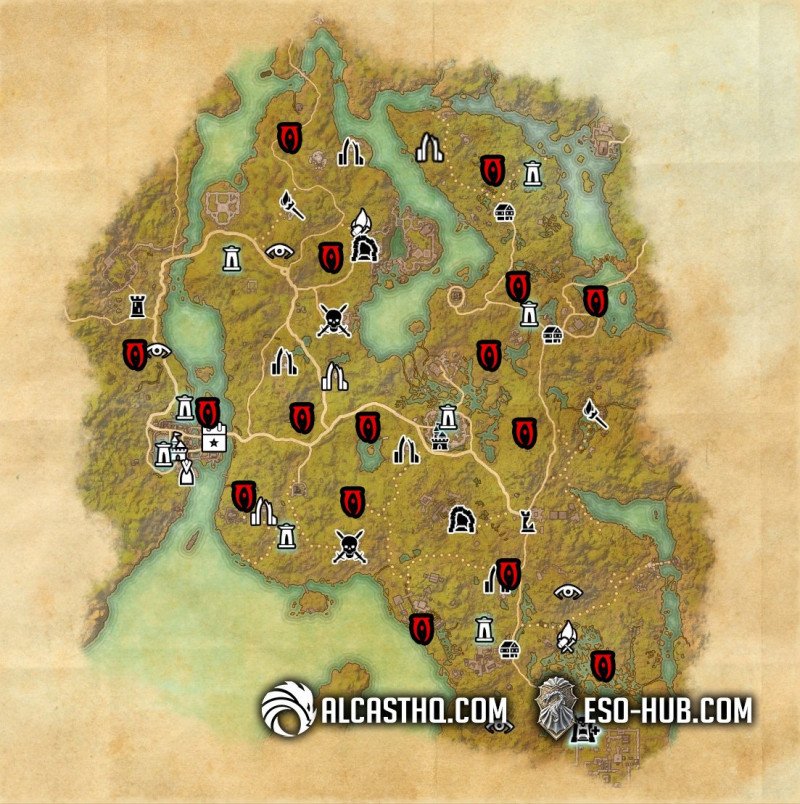 The Oblivion Portals appear (more or less) randomly on the map in the zone Blackwood and are guarded by a couple of Daedra, which the player needs to defeat in order to be able to enter the Deadlands - Mehrunes Dagon’s realm.

The Deadlands are Mehrunes Dagon’s realm, the Daedric Prince of destruction, change, revolution, energy and ambition. Mehrunes Dagon is the foe of all mortal races, and has attempted to conquer the physical world Nirn many times. His plans seem to get more real as he is now able to spawn small portals which connect his realm to our world.
Lava and molten rock are predominantly present in this inhospitable nightmare. It is pocked with islands where his servants, the Dremora, roam his plane and carry out his works. 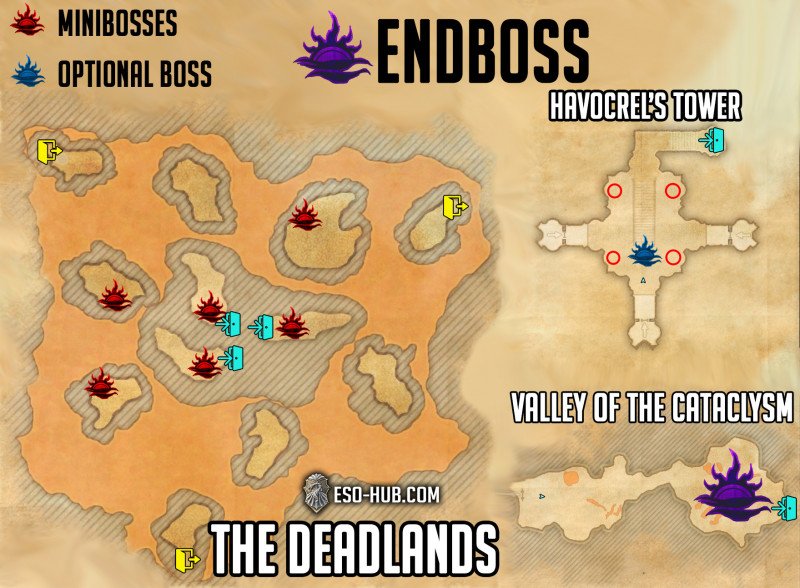 Deadlands Map with all Bosses

The islands are filled with Daedra of all shape and form, some more dangerous than others. In total we have 9 islands, and usually it’s 2 that the player has to fight through in order to get to the final tower before they meet the endboss.

This tower doesn’t have any enemies. Instead, all players that have joined the Deadlands through a different portal, will be joined together in this tower, making their way to the Endboss of this dungeon.
However, there’s an optional boss here which you can summon by activating all fire guardians by touching them and then killing them.

Deadlands - Valley of the Cataclyst

This is the final island. A few groups of Daedra stand in your way, the last noticeable presence before you have to face Havocrel, the Duke of Storms.
It looks like he is still in the process of being summoned as the player enters the valley, as several Daedra are gathered in summoning circles and are focused on the Duke’s avatar.

In the Deadlands you can find all kinds of daedric enemies. You have the lower Dremora that can be either casters or melee, with the Dremora Flame Adepts casting large rings of fire which build a field of protection. The Ruinach, Xivilai, Fire Behemoths and Iron Atronachs join in as melee fighters.
Then you have the Clannfear, which will jump and stun everyone in their wake.
There’s also the Watchlings, small, flying eyes which can swirl and burn and throw you off your feet. Havocrel Duke of Storms
Flarion - He is a fire atronach, that will send out a wave of flames in front of him upon engaging him. He then explodes in fiery explosives that will cause a lot of fires on the ground. At around 50% of his health, Flarion will receive a damage shield and stomp the ground, causing spires to erupt. He also has a very nasty Heavy Attack, so that the one tanking him should make sure to block.
Ol’icath - A giant Daedroth that has a frightful stomp which will make players stumble and a flame breath that will throw the player off their feet.
Domoira - She is a very fiery Dremora, wielding a one-hand weapon and a shield. She will snare the player with talons, and then let fire meteors rain from the sky that will stun them. She also has a fiery breath attack she casts in front of herself in a cone. She also casts a large ring of fire that will hurt everyone standing inside it.
Faram-Xaran - She is a Nixad and will send out fiery flames from herself. Her most dangerous attack though is a volcano that she will call forward and that will hurt every player surrounding her, unless someone stands in it and blocks.
Kmolag
Salosuum - A titan that is accompanied by two Ruinachs that aid him in attacking the player. From time to time he attacks with a fire breath that will stun the one having aggro of the boss. He also erupts into fire and targets the player with fireballs, additionally to firepools spawning on the floor. Towards the end of his life he also calls up on two Ash Titans that assist him in his fight.
Havocrel Duke of Storms - The final boss. The player first has to fight daedric adds that seem to summon the Duke. Upon them dying, their lifeforce seems to fill up the Duke and awaken him. When the initial Daedra dies, a wave of more Daedra will appear and try to kill the player. Killing these will bring forth an even more powerful wave of Daedra, with Ash Titans spewing fire. Upon killing these, the Duke awakens and will now be killable. Bringing him down to around 83% will make him go into his shield to call forth more Daedra that wander up to him, trying to get empowered. This continues until the boss is dead.

Ruinach Count of Cataclysm is a Ruinach that can be found in the Oblivion Portals as a secret boss. He is located in Havocrel’s Tower, but only spawns by interacting with the four Flame Behemoth statues and killing them.

After defeating Havocrel Duke of Storms, he will drop an Overland set piece of either Deadlands Assassin or Bog Raider. The player has to destroy the Daedric Device in order to end the event of this Public Dungeon and in order to be able to leave the Deadlands.
Upon destroying the device, a chest will appear that can be looted. This can have either Deadlands Assassin or Bog Raider Jewelry.