Blacksmithing materials can be very expensive in the guild stores, therefore many players prefer to farm them. In this part of the Blacksmithing Guide we are going to showcase the best ways to farm materials.

Preparation and a solid tactic is important to be as efficient as possible while gathering materials. This applies to all crafting related materials that you can farm in the open world. You don't need to follow every step of this guide, but the more steps you follow, the faster you will be able to farm materials.

This obviously takes into consideration that you will have everything active, which most of the time is not the case. But this should show you how many skill points you could really sink into crafting and why a character specifically made for crafting might be a good choice if you plan to play this game long term!

Speedy G. is a build that is optimized for farming materials as fast as possible. The build is at the maximum speed limit and can stay in stealth a 100% of the time without running out of resources. I always recommend creating a Nightblade for a crafting/ farming character, you can stealth pretty much through all the monsters to avoid losing time fighting monsters! 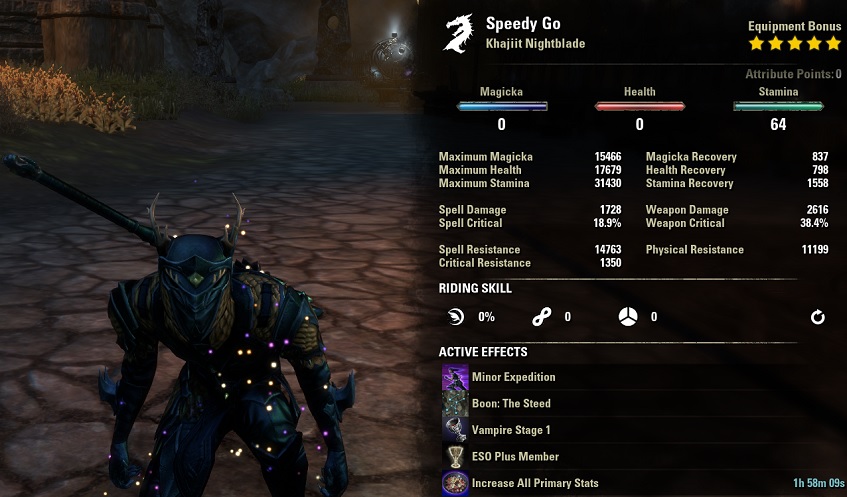 Lets analyze all the options you have that could increase your speed. The speed limit is 200%, walking already accounts for 100% speed. Now what can we do to boost our speed? We also should differentiate our speed while walking/stealth vs while sprinting. Reaching 200% speed limit while sprinting is easy to achieve.

However, we want to get close to 200% with our walk speed in stealth/sneak. Therefore, we can simply sneak, be invisible all the time, have unlimited resources due to a neat trick and pretty much have 200% speed without sprinting.

Important: We need to be a Vampire with this setup to ignore the movement speed penalty in sneak thanks to the Dark Stalker passive.

Important: Be a Vampire for the Dark Stalker passive to remove the speed penalty in sneak! Now lets calculate what our speed is with the setup and what options you have to diversify the build.

All this combined already gives us a 145% walk speed buff.

This brings us already to 170% speed while we are sneaking.

Now you have three more options

So, without even sprinting we can pretty much reach 200% while in permanent sneak and have unlimited resources thanks to the Vesture of Darloc Brae set and a smaller detection radius.

The build video showcases the speed in stealth wonderfully and you can also see that we never actually lose resources.

This video is a showcase of the build that was done a while ago farming materials.