The main goal of alchemy is to craft powerful potions and poisons that can have devastating effects in combat. To successfully craft potions or poisons in the Elder Scrolls Online, you need to farm reagents (plants, monster remains) and solvents (water, oils, etc.).

What does an Alchemist do?

An alchemist gathers natural reagents found growing in the world and mixes them with solvents at an Alchemy Table to create potions and poisons. Particularly pure water will produce a potion to boost the effectiveness of the user, while various viscous oils can be used to produce poisons that have negative effects on the enemy. The grade of the solvent will determine the potency (level) of the product.

All reagents have hidden traits which determine a product's effects. Similar traits from different reagents must be stacked to bring out their magical qualities. Each trait can be countered by another trait, and if the wrong reagents are mixed together they might cancel each other out, basically rendering the potions or poison useless. A skilled alchemist experiments to find reagent combinations that offer the best results.

Poisons are at their strongest when concentrated. The more effects that are present on a poison, the less potent each individual effect will become. Poisons that are crafted with positive effects, such as restore health, will drain that effect from the target to enhance the poisoner.

How do I recognize a Solvent?

Here you can see a character picking up a Lorkhan's Tears which he extracted from pure water at a river. Lorkhan's Tear is a level 150 Champion Points Solvent.

How do I recognize a Reagent?

In the next example you see a character picking up a Nirnroot flower, which is a reagent. Nirnroot grows close to rivers, therefore they are fairly easy to find.

What are Reagent Traits?

Each reagent (flower) has four different traits. You can find a full list of all reagent traits in the Alchemy Reagent Traits Guide. Here we have a Columbine and a Corn Flower with various traits. At first, the traits will be listed as "unknown". When you successfully mix potions or poisons, the traits will be discovered. You can find the most efficient way to do that in the Alchemy Traits Discovery Guide.

Creating a Potion or Poison

To create a potion you will need a solvent (Lorkhan's Tear) and reagents, in our example these are Corn Flower, Lady's Smock and Water Hyacinth. With this combination we are creating an Essence of Spell Power. That Potion will give us Major Sorcery, Major Prophecy, Major Intellect and extra magicka. Yes, that is A LOT of buffs. 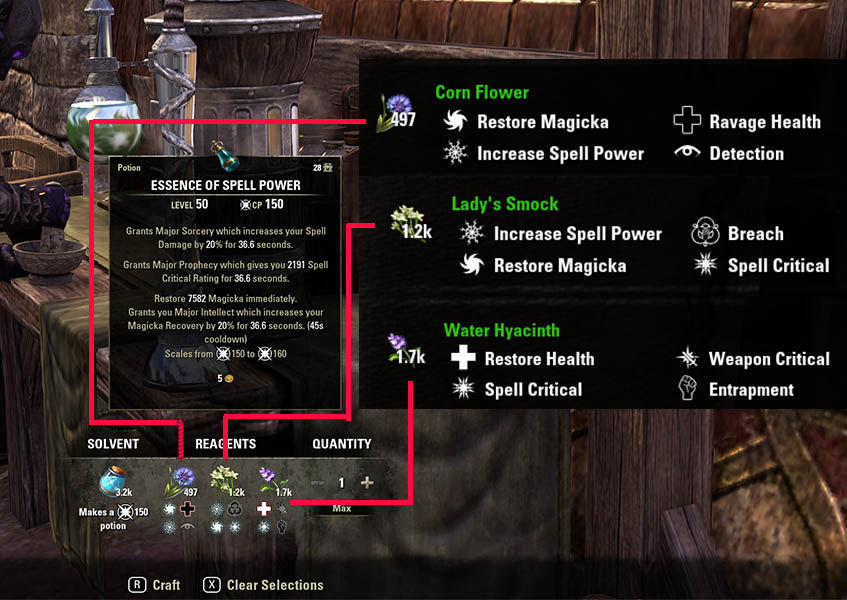 The same procedure works with poisons. However, instead of selecting a pure water we want to select a viscous oil such as the Alkahest in the picture. Already mentioned above, the more reagents you mix together to create a poison, the shorter the duration of the poison. So you might want to only use two reagents instead of three to get a longer duration on the poison effect. 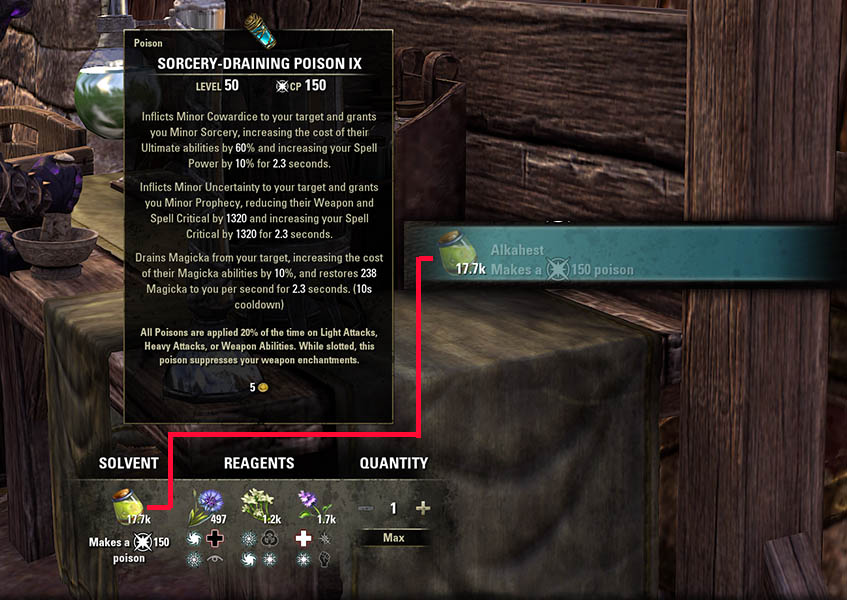 You can decide for yourself how many potions or poisons you want to craft. I would recommend crafting them in smaller batches, because if you combine the wrong reagents and you instantly craft 1000 wrong potions, all your hard earned materials will be gone. Therefore always double check whether it is really the potion or poison you want to craft!

The Alchemy Table is also used to create certain furnishings. The tab is called "Formulae".
Contrary to the creation of potions or poisons, you need a recipe for each furnishing. As soon as you have learned it, you can create as many furnishings as you like.

Crafting a furnishing works the same as when you craft a potion. You need to make sure to have the right ingredients, if that is the case you can craft the furnishing. In this example here we had the Daedric Brazier, Table. Once we crafted it we can place it in our home. 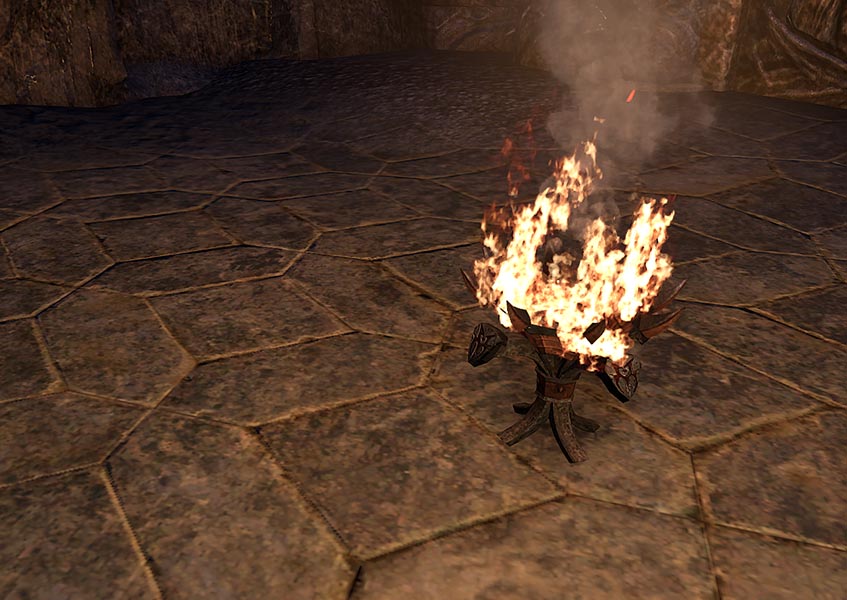 Alchemy is an important tool in ESO to create powerful potions and poisons, but also for crafting certain furnishings. Every player in the Elder Scrolls Online will sooner or later get in touch with alchemy. You can also sell potions, poisons, furnishings or simply the ingredients in order to make gold. Certain ingredients have very high prices because they are used in lots of combinations or they are super rare.

The follow up guides will go into greater detail on how you can achieve certain tasks and how you can increase your efficiency within alchemy!