ESO is setting sail to mysterious lands in 2022

The Elder Scrolls Online (ESO) just teased their 2022 chapter story-arch. While almost everything is still left to speculations, there are certain aspects of the new teaser that could mean we are setting sail for new lands, lands potentially beyond Tamriel.

Are we heading for new land?

The chapter teaser starts with a view of a large city, located in a bay at the foot of large, white cliffs. These cliffs are covered in dense vegetation. While we zoom in to the city, we see cliffs, rock formations and a general oceanic landscape with bays and islets, almost like a maze. According to the lore, in the year 2E 486 the king of Alinor ordered his navy to chase a Maormer fleet. Only a single High-elf ship survived. Those survivors described Pyandonea (the continent of the Maormer) as "a sea jungle, barraged by mist storms. Massive plateaus spill over with vegetation which form mazes around valleys of ocean". It seems plausible that the mysterious land in the teaser fits this description.

This is of course still speculation. However, it would be a major step for the Elder Scrolls Online (ESO) to finally endeavor beyond Tamriel and explore the vast unknowns of Nirn.

A city in the new mysterious land

During the chapter teaser, we see three ships navigating the ocean. If you observe the flags on these ships, you can discern that one of them is from the Aldmeri Dominion, one from the Daggerfall Covenant and one from the Ebonheart Pact. They seem to be sailing in formation without any hostilities. This could mean that the alliances are joining forces to engage with a foreign enemy. Maybe, for a small amount of time, Tamriel will unite in order to fight off a threat far bigger than the Three-Banners-War. We get a glimps of this potential antagonist in the trailer. A humanoid figure dressed in very heavy armor is standing on the balcony of a tower, overlooking the Tamriellic ships arriving in his harbor.

While we cannot discern much from the appearance of this potantial antagonist, it does seem like his sword bears the mark of a serpent head, another icon of the Maormer. His sabatons also seem to resemble a similar style to the Pyandonean style motif we already have ingame. The marks on the back of his cuirass also seem to vaguely resemble a serpent.

The potential antagonist of 2022

If we are truly sailing to the continent of Pyandonea, we will definitely get to know the Maormer (also known as Sea-elves) better. One could even speculate that this race could be added as an 11th playable race. Since its launch in 2014, the Elder Scrolls Online has not added any new playable races. However, this is of course heavy speculation.

The Maormer also have a special kind of magic called Snake-magic. This is related to the mighty sea-serpents, beasts which they have learned to tame and control. This again could potentially be something we can see reflected in new skills or armor sets.

A Breton island off the coast of High Rock

Another theory is that the fleet in the teaser is sailing to the High Isle, a Breton island speculated to be located somewhere off the coast of High Rock. The High Isle is mentioned in the lore book "The First Gleaner" which can be found in the Deadlands in the Elder Scrolls Online. Matt Firor stated in an interview that 2022 will focus on one of the less explored race's cultures, and shift away from the world-ending threats, tackling political intrigue and factional infighting instead. This could potentially also mean Breton, though it could mean any race really.

The potential antagonist in the teaser is wearing heavy armor. At the back of his cuirass, you can see two shapes. These shapes could be serpents, however, we can see similar-ish shapes on the already existing Breton armor in the game. A theory could be that this armor is Ancestral Breton armor, continuing the trend of adding ancestral motifs to the game. 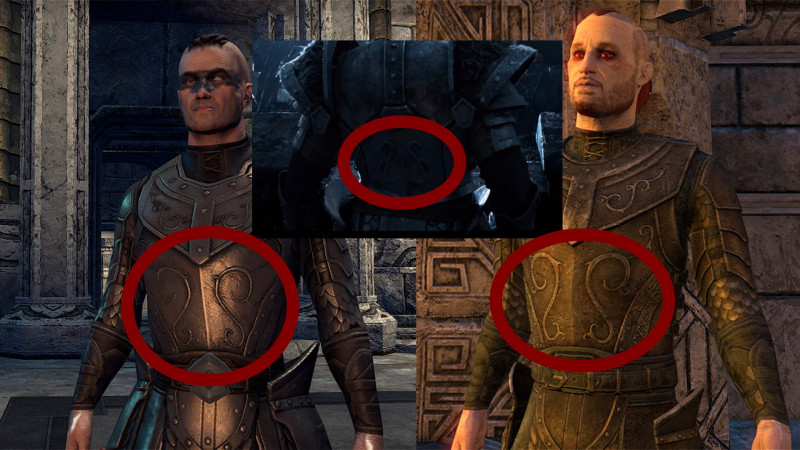 While the city in the teaser can't be inspected in full detail, the architecture does have some features that are similar to the architecture seen in Glenumbra and Stormhaven. On the left side you can see something that resembles a small fort with round, brick-built towers as seen in other Breton areas. The houses also present similarities, although the houses in the trailers are built with a brighter material.

The unknown city in the teaser

Jakarn is a Breton character you first meet on Stros M'Kai. He is one of the characters in ESO that returns from time to time. Given that he is a rogue/pirate, a chapter based on Bretons on seafaring could suggest we will meet and assist Jakarn once more.

Zenimax Online Studios has scheduled an official livestream on the 27th of January at 3pm EST where they will do a full reveal of what is to come to the Elder Scrolls Online in 2022. You can watch this livestream on twitch.tv/bethesda. During this stream you can also earn a Barnacle-Back Coral Crab pet.

Finally we ask you to please keep in mind that this article is speculatory. We still know very little and will all have to wait for the reveal on the 27th of January. Want to discuss with us? Join the ESO community partner Discord server.

The ESO Teaser Trailer for the New 2022 Chapter

Crypt of Hearts I