Welcome to the bestESO Addons Guide to enhance your ingame experience! In here you will find the Top 10 Addons for ESO split in three categories: combat, utility and housing. If you need to understand how addons work in general, please follow the ESO Addons Guide and learn all about how to install addons in ESO.

A lot of the addons need LIB addons, if you see there is a DEPENDENCY, you want to click on the addon and see what LIB addons you need. With the Minion Manager you can add LIB addons easily within a few seconds to your addon folder.
Lib = Library

Combat addons are very popular in ESO (Elder Scrolls Online). They can make your gameplay a lot easier and pleasant.

Combat Metrics is an addon to track your fights and use it to analyse your fights to increase your DPS. You can see which skills caused what kind of damage and which enemy caused the incoming damage. You can see incoming and outgoing heals, check which buffs and debuffs were active during the fight and how many resources were used or regenerated. Combat Metrics is one of the most if not the most popular ESO addon for combat related gameplay.

Hodor Reflexes is a User Interface combat addon that shares DPS and Ultimates to your group. This can be very handy if you need to see how much DPS you deal, or for healers and tanks to show when their Ultimate is ready. It is often used in a trial setting and recommended by trial leaders.
While the addon is enabled, it will try to automatically disable data sharing in the following addons: Raid Notifier, Bandits UI, Group Damage Share, Taos Group Tools, FTC. Any other addons that share ultimate/damage will conflict with Hodor Reflexes and increase the chances of getting kicked from the server.

Code’s Combat Alerts helps you in giving you additional clues to the in-game clues which can sometimes be overlooked in hectic situations or when you are not entirely sure or not being able to focus too much on the game.
Such examples are Taking Aim, various Dodge Roll Mechanics (such as from bosses in Spindleclutch or Falkreath Hold) or Block. Especially with Taking Aim the windup of the mechanic is oftentimes 9 seconds, which many players don’t know, even though they might be seeing the visual clue. Timing a Dodge Roll correctly is very important in this case.

Foundry Tactical Combat is an interface enhancement for ESO which populates the game environment with active combat and player data allowing you to respond and react effectively to evolving combat situations. The default settings of this addon will feel familiar to veteran MMO players who miss certain features which are omitted from the default ESO user interface.

The Harven's Potions Alert addon will automatically select a presetted quickslot when one of player attributes drop below defined value. It will also show an alert window with selected quickslot item icon and reminder message to press the quickslot key. There are three quickslots that can be defined in the addon setting window together with threshold values (health, magicka and stamina). The alert window position can be changed by dragging it. Health alert has the highest priority.

The Global Cooldown Bar addon adds a bar to your screen that shows the remaining time on your global cooldown after doing anything that affects it. This allows you to get a better idea of when your game is ready to take the next action input, even when you may not be able to see your character's animation clearly.

TheDisplay Leads Addon displays Leads in all their glory. Either via /displayleads or keyboard shortcut with a lot of information, including detailed Lead Location in a tooltip. It also has a ton of filters, like Major Filters (Can Scry, Can Find, Missing Codex), Zone Filters (Current Zone, No minor DLC) and Set/Type Filters (Multipart Antiquities)

Circonians Addon Selector allows you to save the current enabled state of all of your addons in an addon pack (also called "profile") that you can give a name to. Then you can click on the name of any saved addon pack in the drop down box and it will reset the enabled/disabled state of each addon back to the state it was in when you saved it (enabled/disabled). You can save multiple addon packs.

The NoAccidentalStealing addon prevents you from accidentally stealing an item - like a weapon or bottle next to the merchant. Stealing becomes possible if one of the following conditions are met:
The double tap timeframe can be set in the addon's menu: ESC -> Settings -> AddOn Settings -> NoAccidentalStealing
This addon can also block you from casting criminal necromancer abilities while out of combat.
To cast criminal abilities while out of combat you must hold the key for a certain duration (the duration can be set in the addon's settings).

HarvestMap displays resource nodes, chests and fishing spots on map, compass and the 3d world. Whenever you harvest crafting materials, lockpick a chest, fish at a fishing hole, this addon will save the location and place a pin on your map, compass and in the 3d world. So if you need a certain resource later, you can easily see the locations where the resource spawns. This addon does NOT come with any pre-collected resource locations, this addon will only display the locations you discovered yourself. However, you can download locations that other players discovered by using the HarvestMap-Data addon.

LoreBooks is an addon to help you find all the locations of the lorebooks in-game. Lorebooks is one of the most downloaded ESO addons.
Features:
Pins on maps of all books of the game. Divided into 3 filters Unknown Lorebooks, Collected Lorebooks, Eidetic Memory. In both Keyboard & Gamepad Modes. Pins also display if the book is in a dungeon & for Eidetic Memory linked to which quest.
Pins on your compass for the Unknown Lorebooks & Eidetic Memory. In both Keyboard & Gamepad Modes
Possibility to unlock Eidetic Memory even without doing the Mage Guild Questline.
Automatic sharing of discovering in order to improve the addon

Wykkyd Mailbox adds a REPLY feature AND it is also an automated return system for in-game mail that you receive in a certain format, to send it right back to the sender. ESO prevents a player from mailing themself. This addon lets 2 players circumvent that by running this addon and simply mailing their gear to each other for return. This addon can now bypass the DELETE confirmation box on empty Mail

You're in a delve or PvP, and suddenly something breaks and you're spammed by lua error messages that you have to click through. That's no good! The BugCatcher addon fixes that. In the most basic terms, it suppresses addon error messages until you want to see them, and that's how it should be!
It's mostly something you can just drop in and forget. BugCatcher will suppress error messages and let you know with an unobtrusive chat window message when it catches a bug. So you can play without stress. Bug Catcher is the no-nonsense addon that deals with the bugs and lets you just play.
And when you want to see those bugs? You have a nice bug catalogue to browse through, at your leisure.

AUI is an addon that consists of several modules that change the user interface of ESO to simplify combat situations.

Housing is one of the most popular features in ESO (Elder Scrolls Online). Lets take a look at the top 10 housing addons for ESO.

Essential Housing Tools (short EHT) is the ultimate tool for anyone wanting to take housing to the next level. This addon makes you able to do things you have only imagined so far, like fog, precise placement of your items, water pools, mechanisms and much much more! 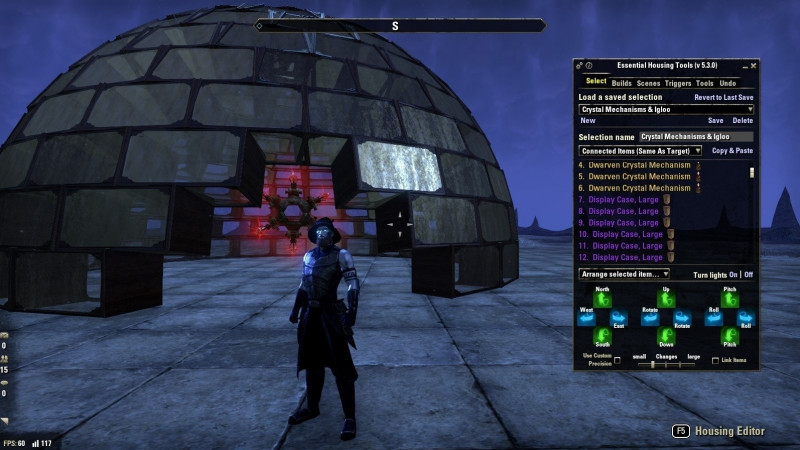 If you are sick of creating scaffolding just to build high up or get to a better vantage point, then the Magic Carpet addon tool is absolutely what you need. It makes you able to build anywhere in any home by giving you the power of flight. All that you need is decorator permission.

The Go Home addon allows you to create up to 10 keybindings for traveling to various houses you own and houses of your friends and guild. You can even choose to travel to other people's houses that are not their primary! There is also an addition to the chat context menu to allow you to quickly travel to someone's primary house directly from the chat window.

The Custom Item Preview addon preview of drawings and pieces of furniture in the inventory, bank, house bank, guild bank. Available from the drop down menu. 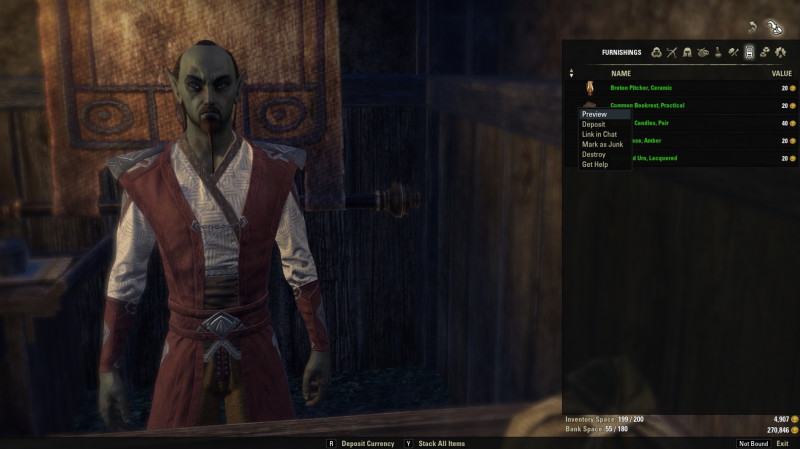 The Where's My Guild Hall addon shows the available "guild halls" for your guild on the guild home screen.
It allows you to set for each of your guilds individually if you want to assume that the guild master owns a guild hall, and/or if you want the addon to look for the "Guild Hall List" (GHL) addon marker characters "
If you turn on Guild Master Owner, then the guild master will always be listed first in the guild halls list on the Guild home page. The guild master will then be followed by any guild members that have the GHL marker or "Guild Hall" marker in their guild member notes (if you have turned on Guild Hall List compatibility mode).
This addon conflicts with Guild Hall List - primarily because we try to use the exact same spot on the Guild page for our guild hall lists.
Now you know everything about the most important addons for ESO (Elder Scrolls Online).

Welcome to the Zone Dailies Guide for ESO. You can find a list of every zone that has dailies available here.
Read more

This is the Outfit System guide for ESO and contains everything you need to know about how to change your Outfit ingame. Follow this guide and you will know everything there is needed to know.
Read more