Welcome, in this guide we are going to take a look at the new Champion Points 2.0 system. ZOS reworked the whole Champion Points system to make it more diverse and less taxing on the servers, which therefore also helps increase the performance of the whole game. 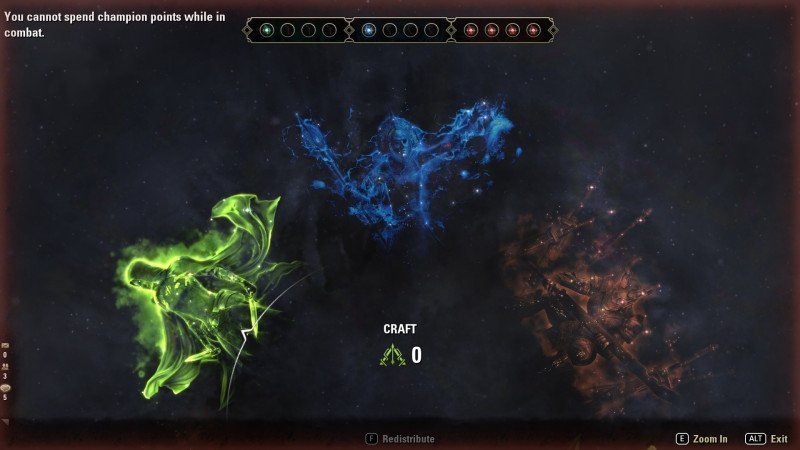 Here is the full comment of the Combat Lead Brian Wheeler about why they changed the Champion Points system.

TLDR: Too heavy impact on combat balance and server performance. The new system is less taxing on the server which should increase performance. And it also impacts combat a lot less, therefore we will have less power creep.

"Back when we first designed the Champion System, the original purpose was to provide players with character advancement beyond level 50. We hit that goal in that the system gave your character more power in incremental stages as you continued to play. The system offered the means to augment your power in very specific roles and fill gaps in your build to help you tackle PvE content, battle against other players in PvP, and aid with crafting. Lastly, the system was originally built to utilize the technology we had at the time which relied heavily on passive abilities to determine if your character should sprint faster, block more, if damage shields were more powerful, etc. Over the years, ESO’s technology, combat, and content have all evolved; due to this, we determined it was also time to take a critical look at the current Champion System design.

Once your characters reach level 50, each time you gain a level you earn a Champion Point. You then spend a Champion Point on more Magicka Regen, Stamina Regen, Damage Mitigation, or any other Champion System star that suits your build or playstyle. This is the simplest form of vertical progression: earn a point, get greater power and “tools” for your playstyle toolbox. While the design is simple, it is also limiting. You spend points in very specific ways to increase what your character already does, whether that be support, damage, or tanking. Additionally, the system’s options to augment those actions are few once you break it down to whether you’re using Magicka or Stamina. As such, while you’re able to progress with the current Champion System, you’re not getting as much in the way of choice as we’d like.

As the game progressed from update to update, the Champion Point cap also increased bit by bit. This allowed you to spend more Champion Points in various stars, which in turn made your characters more powerful. The term “power” is something that can be very broad in definition, so let’s just use one of many definitions when it relates to PvE content. In this case, we’re defining “power” as being able to complete content faster, with reduced pressure on resource management and in some cases minimal risk of death. This increase in power causes a very real gap in content completion ability for players who are at the Champion Point cap versus those who are not. This creates several issues ranging from social pressures of requiring a minimum CP to play with others to creating content which essentially ignores Champion bonuses (like higher health) to create difficult encounters. These issues effectively nullify the whole point of the Champion system.

As mentioned earlier, the current Champion System relies on passive abilities and this was largely due to the technology that was available at the time. On the backend, the game will perform a check on most passive abilities each time you perform an action, whether that be drinking a potion, dodge rolling, or using an ability on your hotbar. The game must also constantly check passive abilities for the right thing at the right time. For example, a Champion ability such as Bastion requires the game to check if a damage shield was cast on every action your character does. Multiply that by the 30-40 passives you have on your character, and the result is a system that puts unnecessary stress on the server.

Given this context and the problems we are looking to solve, there are several aspects of Champion that we needed to improve:


With all those aspects and more in mind, we are introducing a revamped Champion System with Update 29.

The new Champion System utilizes several types of stars – the locations within the Champion System UI that you spend your points in – and how you use them. This includes how stars apply stats to your character, and how many Champion Points are necessary to unlock those stats per star. Some stars require you to spend a set number of points to get a set amount of stats, while others have stages to them. A simple example is a star that has 50 total points that grants Stamina for every 10 points invested, up to 50 points.

Some stars also require you to slot them into a new UI element called the Champion Bar. The Champion Bar has 12 total slots – four per constellation – and allows you to drag-and-drop (aka. “Slotting”) specific stars into it to activate their bonuses. The functionality is very similar to your ability bar. Stars which can be slotted into the Champion Bar are bonuses that can offer power or augment a playstyle you enjoy. The capability to control which stars you slot at any given time is the main aspect that governs vertical progression. Other stars which grant stats by unlocking their thresholds, and don’t need to be slotted, will further increase your power vertically. The blend of these two types of stars allows the updated Champion System to offer both power and choice while also promoting greater consideration of, and consequences for, your choices.

Because there is an element of choice when determining which stars to slot vs. passive stars that grant stats on their own, there is also a reduction in how many passives are calculated per combat action. As noted above, with 12 slotted passives on the Champion Bar, the calculations required for combat, especially in high-density situations, is greatly reduced. Additionally, most stars that grant stats without conditions function similarly to item set bonuses. These stats are simply added to your character and do not require an ability to drive their function. By doing this, we’re able to put less strain on the server by having these passives function differently than the current Champion bonuses that are driven by abilities and requirements. Keep in mind this new system isn’t a magic bullet to fix performance, but these changes aid in keeping these Champion abilities performant while also giving compelling options for what to slot.

The last major aspect of the Champion System that we wanted to adjust was room for growth and variety. As ESO continues to expand year after year with new content and systems, we want the Champion System to evolve with it. The new slotted passives and Champion Bar will greatly support this, and allows us to create and add new, unique stars that can interact with new or old systems.

Another method of expanding on the system is our Clustering UI. Most of the Champion constellations have a top layer of stars, but with the launch of the updated Champion System, there is one Constellation that has a few “clusters.” These clusters are essentially sub-constellations of all-new stars. This second layer gives us another canvas on which to add more stars or simply group stars together that suit a common purpose. Each major constellation has several sub-layers we can use, and this gives us a great deal of expandability in the future!

With the new methods of spending Champion Points, the new Champion Bar, and the Clustering layers, we hope this shows how the updated Champion System builds upon the current system and overall improves it. We look forward to reading all your feedback about this great new way to augment your characters. Don’t forget, you can try it out on the PTS starting tomorrow!"

Another comment that got added later to specify some extra information by Combat Lead Brian Wheeler about the cap and power of the new Champion Points system.

With Update 29, we are also increasing (or releasing, actually) the Champion Point cap to 3600. In CP 1.0, the cap – or maximum Champion Points you could earn – was always 3600, but we had a per-patch cap to put a clamp on the maximum power you could extract from CP. The current cap of 810 is where we stopped increasing that number because we saw significant power gaps between players that were lower CP vs. higher.

With CP 2.0, we have reduced a lot of that gap by baking in the base max Magicka, Stamina, and Health you got from spending 100 points per “CP color” into your characters as you level up. We have also increased Weapon and Spell damage for players with this change to make up for that gap. Lastly, we adjusted the rate at which you gain CP to be faster than it currently is on the live servers. Considering we haven’t raised the cap by 30 per patch in quite some time, we adjusted the CP curve to accommodate for that difference with a focus on speeding up the gain between 810 CP and roughly 1200 CP. This means you’ll gain CP levels faster at lower levels, and the rate at which you gain CP between 810 and 1200 (ish) will be slightly faster than how it is now with CP 1.0. After 1200 CP or so, the CP gain rate will feel about the same as it did in CP 1.0 once you reached higher ranks.

As noted earlier in this discussion, we wanted to provide a system that favors horizontal progression over vertical. That said, there is a certain point where the system shifts to favor horizontal progression IF you invest enough CP in vertical power first. That switch happens around the point where you’ve invested 300 CP per tree (or 900 total CP), depending on how you spend your CP. It really tails off around 1200 total CP. We chose those value milestones as the points where power turns more into choices because the majority of players with CP in ESO are actually fairly close to, or in that range of CP levels.

This also brings us back to the baked-in stats for players levels 1-50, and more specifically, damage output. Those changes combined with CP-value adjustments will result in changes in DPS output. With the baked-in weapon and spell damage, max Magicka and max Stamina, many players will see an overall increase in their DPS output in the lower spectrum of CP (EG 100-300 CP). Around 300 CP, we wanted to ensure that a baseline of DPS was capable to complete all DLC dungeons on Normal, as that’s also when those dungeons open up in the Activity Finder. Around 300-600 CP, an average player who spends their points in relatively the same way as they would in CP 1.0, should see no real difference in DPS output and in turn no significant impact in the ability to complete activities you did before.

For players who are in the higher end of the CP scale (900+) that participate in the most challenging and demanding encounters, you will still be able to beat those encounters. Where you’ll see a difference is a shift in favoring survivability over DPS at that point. This is due to several factors we’ve already noted regarding social pressure to “catch up” in CP, bypassing or otherwise ignoring content mechanics, and reducing the gap between high-CP vs. low-CP players. Internally, we’ve tested many, many encounters with CP 2.0 and all of them were still very possible to beat. It may not be as fast at first with CP 2.0, but as new strategies develop and builds evolve with this system in mind, we are confident that players will find new and diverse builds that allow them to master current and future content.

As with all updates and PTS cycles, we anticipate there will be further adjustments to balance based on player feedback!